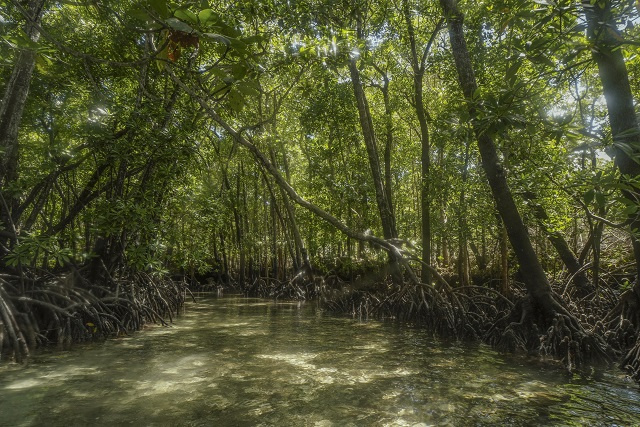 (Seychelles News Agency) - Scientists and researchers in Seychelles have commended and described as excellent the move for 100 percent protection of the island nation's mangroves and seagrass. This move to be achieved by next year is however being seen as one with challenges, which will require full commitment from the government.

President Wavel Ramkalawan made the statement at the high-level segment for heads of state and government in the 27th Conference of the Parties (COP27) in Sharm El-Sheikh, Egypt.

According to the head of state, "this will be added to the 32 percent of protecting our oceans, our bans on single use plastics and our steps we are taking in industrial fishing; all these show that Seychelles is a serious partner in environmental conservation."

Whilst this move is being welcomed and seen as the right way to go for Seychelles, an island nation often referred to as a world leader and champion of environment issues, a local environmentalist feels that this commitment is not without its challenges.

"It is our actions that should do the talking." We must show actions, actions that will need to be taken for us to be able to protect and conserve our mangroves and seagrass," Elvina Henriette, a conservation biologist told SNA.

Henriette is also the programme manager of the Terrestrial Restoration Action Society of Seychelles (TRASS), a non-government organisation based on Praslin - the second most populated island of Seychelles.

Over the past 13 years, TRASS has been involved in rehabilitating mangrove forests and ensuring the conservation of the wetlands of Praslin and the neighboring national park of Curieuse.

Henriette added that she is concerned with some decisions that show that the government is not 100 percent committed to its commitment. She gave examples of when big developers are given permission to dredge the sea bed destroying the seagrass and when there is no action from the ministry concerned when mangroves and endemic plants are cut or tampered with.

The availability of resources, transparency in how it is being used and how it can trickle down to groups working at community levels is something that Henriette said should be looked at to ensure that the government is supported in achieving its achievement.

American-Seychellois conservationist Jeanne Mortimer, who in 2021 was involved in the first ever seagrass mapping exercise as part of a project to collect data on their carbon uptake capacity, described the news to fully protect the seagrass as wonderful news for Seychelles and for the planet.

"Seagrass and mangrove ecosystems are heavy weapons in our fight against climate change. They collect and store carbon and keep it away from the atmosphere for hundreds of years. Good for the planet!" Mortimer told SNA.

Mortimer added that seagrass directly benefits Seychelles "by protecting our coastlines from erosion, providing food and habitat for commercially important fisheries and endangered species, and enhancing the health of coral reefs by balancing water chemistry, adding oxygen and removing carbon dioxide. The commitment of our President to protecting these important ecosystems makes him a hero in my eyes," she said.

Maria Brioche, who has for many years been involved in many community-based projects with children, said that Seychelles' pledge to seagrass and mangrove is a plus for the islands. "I know the local authority will put in place what is needed to make this happen, in terms of resources. I know the kids as custodians of our islands will definitely play their part in ensuring that the same is achieved."

Conservation » Be a reporter: Write and send your article » Subscribe for news alert
Tags: Conference of the Parties