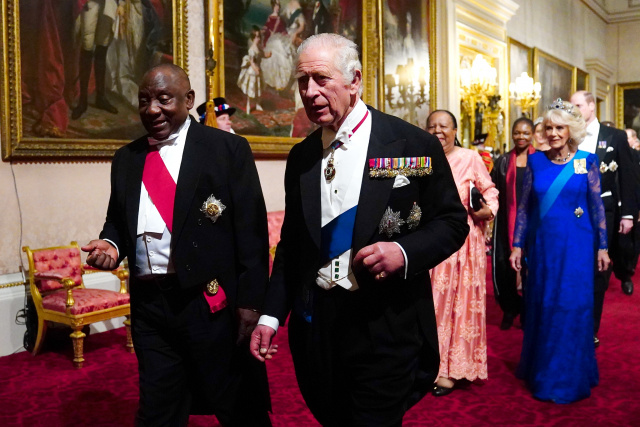 (AFP) - South African President Cyril Ramaphosa on Tuesday urged rich nations to help save vulnerable ones from climate change, as he made the first state visit of King Charles III's reign.

Gun salutes were fired across London as Charles and Queen Consort Camilla were joined by heir to the throne Prince William and his wife Catherine to greet Ramaphosa for a ceremonial welcome at Horse Guards Parade.

The monarch and Ramaphosa, both dressed in dark overcoats against the November chill, inspected the guard of honour together.

In a carriage procession escorted by mounted soldiers from the Household Cavalry, the parties then travelled to Buckingham Palace.

The two-day visit sees Charles finally presiding over proceedings after decades playing a supporting role to his mother, Elizabeth II, who died in September.

For Ramaphosa, a protege of anti-apartheid icon Nelson Mandela, however, it comes amid political difficulties and a threat of impeachment at home.

Addressing UK parliamentarians in the ornate Royal Gallery of the Palace of Westminster, Ramaphosa nodded at the corruption endemic in his country -- including, for his critics, in the presidency itself.

He said his government was striving "to rebuild our economy in the wake of the pandemic and the era of state capture", as he urged the UK government to let in more South African students ahead of talks Wednesday with British Prime Minister Rishi Sunak.

Following the recent COP27 climate meeting in Egypt, Ramaphosa said an agreement to create a fund for poor and developing nations needed to be turned into cash.

"This should not be seen as charity," he said.

"It is compensation for the harm done -- and the harm yet to be done -- to people in developing economies as a consequence of the industrialisation that wealthy countries have had over many years."

The king, long known for his advocacy on issues relating to the climate, said "we must find and implement practical solutions to the twin, existential threats of climate change and biodiversity loss".

Ahead of the speech in parliament, Ramaphosa toured nearby Westminster Abbey including a memorial stone for Mandela, who served as president of South Africa between 1994 and 1999.

Afterwards, he went on to a state banquet hosted by Charles at Buckingham Palace.

Foreign Secretary James Cleverly said the choice of Ramaphosa for Charles's first state visit was a sign of the UK's "enduring commitment" to Africa, even as it eyes new partners in Asia post-Brexit.

At the start of the visit, the UK and South African governments announced the launch of the next phase of the "UK-South Africa Infrastructure Partnership".

"South Africa is already the UK's biggest trading partner on the continent, and we have ambitious plans to turbocharge infrastructure investment and economic growth together," Sunak said.

Trade with South Africa, the continent's second-biggest economy, is worth £10.7 billion ($12.7 billion) a year.

But political problems in South Africa threatened to cast a shadow over the ceremonial pomp and splendour of the state visit.

Ramaphosa is at risk of impeachment for allegedly covering up a crime, accused of concealing a multimillion-dollar cash theft.

He faces an accusation that he failed to report a heist at his luxury cattle farmhouse in which robbers took four million dollars in cash, and instead organised for the robbers to be kidnapped and bribed into silence.

He has faced calls to resign and the deeply divided ruling African National Congress (ANC) is due to hold a vote on its leadership in December.

The president has acknowledged a burglary but denies kidnapping and bribery, saying he reported the break-in to the police.

South African lawmakers will discuss next month the findings of a special panel tasked with establishing whether Ramaphosa should face impeachment.