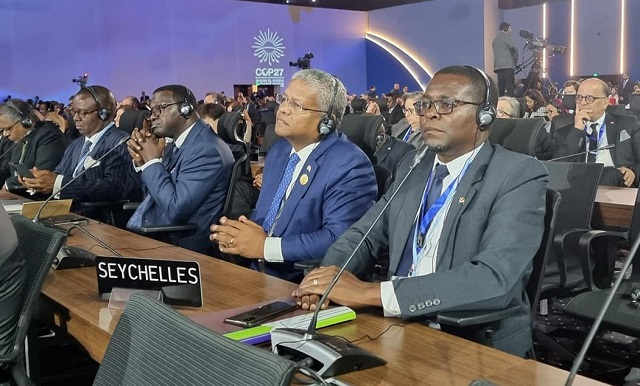 Joubert (front right) who attended the conference with President Ramkalwan said that the agreement is something positive. (State House)

(Seychelles News Agency) - The deal for a 'loss and damage' fund established at COP27 is a great achievement for small islands and vulnerable nations but not enough is being done to mitigate global warming to below 1.5 degrees Celsius, a Seychelles' top government official said on Tuesday.

The breakthrough agreement to provide 'loss and damage' funding was made on November 20, the last day of the 27th Conference of the Parties to the United Nations Framework Convention on Climate Change (COP27). The funding will go to vulnerable countries being affected the worst by climate change.

In an interview with SNA, the Minister for Agriculture, Climate Change and Environment, Flavien Joubert, said that the agreement is something positive, however, other issues have not made any significant progress, especially when it comes to mitigation.

"One of the campaigns Seychelles is supporting as a small island nation is keeping the 1.5 degrees commitment alive. We are not making progress when it comes to this. Even if there is the 'loss and damage' fund, the world is not doing enough mitigation to stay within the 1.5 degrees Celsius limit and this is a major concern for us as a country. It will be beyond our control should things continue as is," said Joubert.

During COP21 in 2015, the Paris Agreement - a legally binding international treaty on climate change - was adopted with the aim of limiting global warming to 1.5 degrees Celsius, compared to pre-industrial levels.

One of Seychelles' COP27 delegates, Wills Agricole, outlined that the aim was to make the Paris Agreement more ambitious, however, this is not what is happening.

"We, as the small island nation, will continue the fight for the Paris Agreement. With current emissions, it will peak in 2025 which is not far, and the fact that developed and industrialised countries are not showing ambition to make the Paris Agreement a reality, even if we are fighting for 'loss and damage', we will always be getting flooding, hurricanes, and droughts. This is simply due to the fact that our ambition to reduce climate change by reducing emissions is not here," said Agricole.

Talking about the 'loss and damage' fund, he outlined that it is expected to become operational next year.

"This is the biggest achievement since Paris. The 'loss and damage' fund was one of our priorities as the Alliance of Small Island States (AOSIS). A transitional committee of around 35 members now needs to be placed together - 15 members of the committee will come from developed countries and 20 from developing countries. We will continue to stand behind it," said Agricole.

In an interview with France24, Seychelles' President Wavel Ramkalawan, who was also the country's delegation leader, said that "the 'loss and damage' fund together with the multi-vulnerability index are two pillars about which Small Island Developing States are talking to the world and saying that something needs to be done."

"I just hope that this good news is translated into reality immediately because the world doesn't have the time to wait. When I talk about Seychelles, I talk about islands that have lost their shapes, and sand dunes that are being destroyed. I have seen our granitic islands losing beaches and we now have more rock armouring instead of beaches. I just hope that the world takes that seriously and that the fund is established and disbursed immediately," said Ramkalwan.

Aside from taking part in the main plenaries events at COP27, Seychelles' 15-member delegation also took part in various side events that were held between November 6 to November 20.

The next COP is expected to take place in the United Arab Emirates late next year.