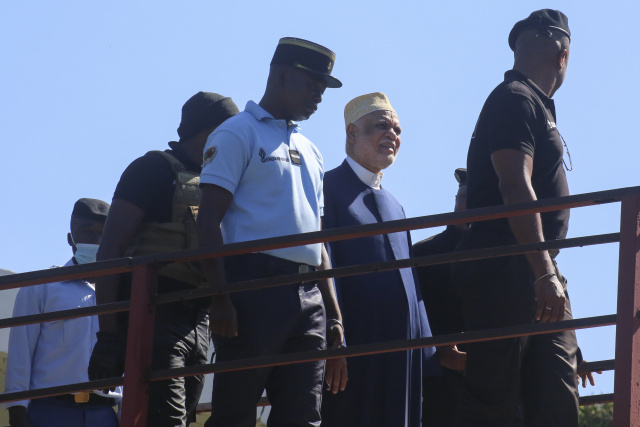 Former Comorian President Ahmed Abdallah Sambi (2nd R), escorted by Gendarmes, arrives at the courthouse in Moroni on November 21, 2022. Sambi, who served as president from 2006-2011 and is the main opponent of current leader Azali Assoumani, has been held under house arrest since May 2018.
Sambi was originally placed under house arrest for disturbing public order.
Three months later he was placed under pre-trial detention for embezzlement, corruption and forgery, over a scandal involving the sale of Comorian passports to stateless people living in Gulf nations. (Photo by Ibrahim YOUSSOUF / AFP)

(AFP) - Comoros' former president Ahmed Abdallah Sambi did not attend the second day of his high treason trial on Tuesday, as lawyers said there were no guarantees he would be judged fairly.

Sambi, 64, the main opponent to current president Azali Assoumani, is facing charges related to the alleged sale of Comorian passports.

"We left the hearing because we did not have guarantees of a fair trial," Mahamoudou Ahamada, one of the ex-president's lawyers told a press conference.

Jan Fermon, another lawyer added Sambi, who appeared in frail health at the first hearing in the capital Moroni on Monday, would no longer attend the proceedings, which are expected to end this week.

The defence team has argued that the president of the security court trying Sambi should recuse himself having previously sat on the panel that decided to indict the former leader.

But their request was denied, with the judge saying he had no knowledge of the merit of the case.

Ali Mohamed Djounaid, who serves as prosecutor in the proceedings told AFP a verdict was to be announced before Thursday, regardless of whether the former president attended court or not.

Sambi, who led the small Indian Ocean archipelago between 2006 and 2011, has already spent four years behind bars, despite the law limiting pre-trial detention to a maximum of eight months.

"I do not want to be tried by this court," Sambi, with a trimmed white beard said as he appeared before the judges on Monday, calling the court "illegal".

Three months later he was put under pre-trial detention for embezzlement, corruption and forgery, in a scandal involving the sale of Comorian passports to stateless people living in Gulf nations. He was then charged with high treason.

His lawyers also accused government officials of seeking to pressure a co-defendant, French Syrian businessman Bashar Kiwan, into testifying against the former president in exchange for a pardon.

Kiwan told AFP he met the Minister of Foreign Affairs, Dhoihir Dhoulkamal, three times, with the last encounter only a few weeks ago in a chic Paris hotel, to "find an amicable settlement".

"The exchanges were courteous at first but quickly became threatening," he said.

The foreign affairs minister confirmed to AFP the meetings took place but disputed the version of events provided by Kiwan, adding it was the businessman who had initiated the encounters.

The Comoros islands -- Anjouan, Grande Comore and Moheli -- have endured years of grinding poverty and political turmoil, including about 20 coups or attempted coups, since independence from France in 1975.