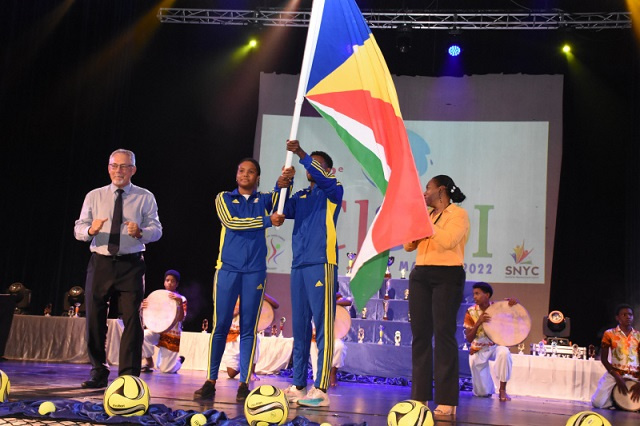 (Seychelles News Agency) - Team Seychelles for the 12th Indian Ocean Youth and Sport Commission (CJSOI) Games was given an official send-off on Tuesday at a ceremony at the International Conference Centre in the capital of Victoria.

Seychellois swimmer Khema Elizabeth and sprinter Gael Barreau were revealed as the two flag bearers for Seychelles. The two athletes received the Seychelles flag from Jean-Francois Ferrari, the Designated Minister, that they will carry during the opening and closing ceremony of the games.

"I am very proud to have been chosen, as it is not every day that you get the chance to carry your country's flag in a major competition," said Barreau.

A team of 200 athletes, coaches and officials will travel to Mauritius to represent Seychelles at the games that will take place December 4-11.

One of the highlights of the event was the traditional parading of the athletes dressed in the uniforms they will wear at the games.

The games will have a total of 11 sports disciplines, which are athletics, boxing, beach handball, boxing, futsal, tennis, table tennis, petanque, sailing, weightlifting, swimming and e-sports.

Addressing the delegation at the ceremony, sports minister Marie-Celine Zialor shared her pride that aside from hosts Mauritius, Seychelles boasts the largest delegation heading to the games.

"These games will allow the young athletes to test themselves against others in the region, where they will know what areas they need to improve, as the nation continues its work towards getting a first ever Olympic Games medal," she said.

For the youth component, Seychelles will participate in musical shows, youth assemblies and two young entrepreneurs will also get the chance to showcase their businesses in Mauritius.

Zialor urged those who will be representing Seychelles on the cultural stage to learn as much as possible from the experience so that they will be able to bring new ideas back to Seychelles.

"My expectation is that this team will be able to bring back more medals than they did from the previous games and I am confident that you can do it," added the minister.

Discipline was also a point the minister stressed, where she urged both the young athletes and the adults to show impeccable levels of discipline during the games.

The delegation, which will leave in three groups - on November 28, December 1 and December 3 - will be headed by Alain Alcindor, who said that he is confident that Seychelles will be able to perform well.

It is an event geared towards competition, as well as cultural exchanges between nations.