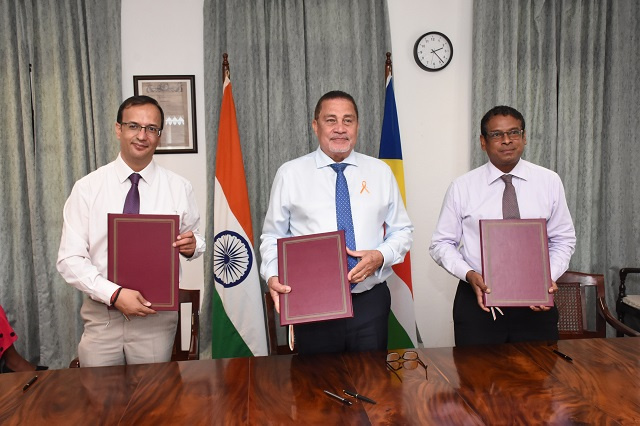 The memorandum of understanding was signed by the respective Seychelles ministers and the Indian High Commissioner (1st left) in a ceremony at the Ministry of Foreign Affairs.

(Seychelles News Agency) - The Indian government will fund three community projects in Seychelles which are expected to benefit over 50 families by the end of 2023 after the signing of an agreement on Friday.

The memorandum of understanding was signed by the respective Seychelles ministers and the Indian High Commissioner in a ceremony at the Ministry of Foreign Affairs.

The three projects will be the building of access roads in three districts in the east of Mahe, the main island, where families are using steps or footpaths.

In his address, the Minister for Housing, Billy Rangasamy, said, "Today is a great day as we have been looking at this project for quite a while. Now it will finally be realised thanks to the government of India, as part of its high impact community projects."

The Minister for Local Government and Community Affairs, Rosemary Hoareau, signed the MoU for the construction of two access roads at the Adela Road in the Pointe Larue district and the other at Bodamier in the district of Anse Aux Pins.

"I want to sincerely thank the Indian government for its generosity, which will bring a better quality of life to a number of families in Seychelles, and look forward to more such projects being done in the future," said Hoareau.

The Adela road will be an extension to the existing one, adding a further 127 metres of the road to the residents, while at Bodamier, a new 330 metre road will be created.

The Indian High Commissioner, Karthik Pande, who signed the agreement on behalf of his government, said that India will continue to look at ways to help Seychelles and finance such projects which will benefit the local community.

All these projects will now go through the tendering process and the works are expected to start early next year and be completed towards the third quarter of 2023.