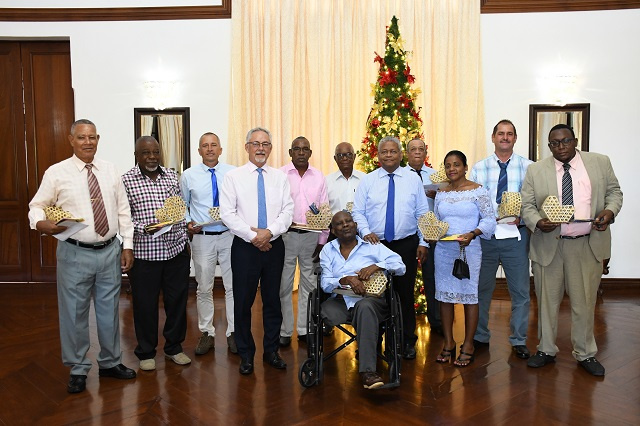 The fishermen or their representatives were presented with a token of recognition which was a shield in the form of a miniature fish trap. (Seychelles Nation)

Ten elderly artisanal fishermen who practiced fishing without the aid of technology, have been recognised for their role, effort and devotion in developing this sector of Seychelles' fisheries industry.

In a short ceremony at State House, Seychelles' President Wavel Ramkalawan, and the fisheries minister, Jean-Francois Ferrari, presented the fishers, most of whom have retired, or their representatives, with a token of recognition. This was a shield in the form of a miniature fish trap.

The ceremony was also one of two activities planned to mark the end of the island nation's fisheries week, which was being celebrated from November 21 through to November 25.

In his address to the press, Ferrari outlined that as the United Nations General Assembly has declared 2022 the International Year of Artisanal Fisheries and Aquaculture, it was only fitting to recognise the contribution of fishermen of yesteryears to the industry.

"They are the ones who developed fisheries in Seychelles. We are talking about the time before tuna fishing or even industrial fishing. We are talking about fishing in a canoe, operated through the use of oars or sails. A lot of these men present today have worked all their lives in the fishing industry and have helped feed this nation," said Ferrari.

One of the retired artisanal fishermen, Simon Gabriel, said that it is an honour to have received this recognition.

"This has not happened before. The youth of today do not have the strength to do what we did as there are too many social ills affecting them. I didn't get a loan to achieve what I did - it was all done through my dedication and strength. We did not rely on the government to get things done - I bought old canoes, repaired and sold them," said Gabriel.

Gabriel, 78, started fishing at the young age of 13, without even completing his schooling.  He shared that making a livelihood was much harder during those times and he didn't have much choice but to go fishing. During that time a bundle of fish sold for 50 cents, whereas today, it is being sold for SCR150 ($12) or SCR200 ($15) depending on the monsoon.

A younger member of the delegation to State House, Jimmy Port Louis, who was representing his grandfather, told SNA that the gesture is greatly welcomed, however, the youth should also be recognised.

"As a youth, I really appreciate the fact that our elders have been recognised for the job they have done, but I would also like to see the youth in the field also recognised as there are some who are taking up this job. This will encourage more youth to join fisheries," said Port-Louis.

The minister encouraged the youth to join the profession despite the difficulties that come with the job adding that "one can make a great livelihood in fisheries and as Seychellois, we need to look at fishing as a job that has great value."

Fisheries » Be a reporter: Write and send your article » Subscribe for news alert
Tags: International Year of Artisanal Fisheries and Aquaculture