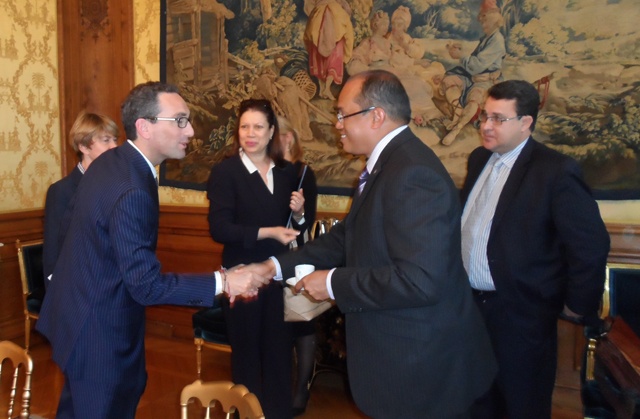 (Seychelles News Agency) - A delegation from Seychelles has met with its main bilateral creditors in London, Paris and Brussels to push forward plans to swap a portion of its external debt in exchange for funding for coastal and marine related conservation projects in an effort to strengthen the island nation's resilience to climate change, according to a press statement from the Seychelles environment and energy ministry.

"Following Seychelles successful macroeconomic programme, which has lead to remarkable economic stability and growth, the Seychelles government has now embarked on a longer term strategy to reduce its debt to a much more sustainable level by 2018. To achieve this, amongst others, the government of Seychelles has launched an innovative initiative called debt swap for which it is seeking support from its main bilateral creditors, most of which are members of the Paris Club," reads the statement.

The delegation headed by the Seychelles Minister of Finance, Trade and Industry, Pierre Laporte, and the Minister of Environment and Energy, Rolph Payet, visited the governments of the United Kingdom, France and Belgium, all of whom are members of the Paris Club, a debt relief group formed from nineteen of some of the world's biggest economies.

"The debt swap involves the partial buying back of existing debt at a discounted rate through a combination of grant money and very low interest loans payable in Seychelles rupees," says the environment and energy ministry.

In London, the Seychelles delegation met with officials from the HM Treasury, Foreign and Commonwealth Office and senior officers of HRH The Prince of Wales' charity organisation, the International Sustainability Unit (ISU). In Paris they met with the advisor of the President of France for climate change issues and senior French government officers from the French Treasury and the Paris Club. The mission ended in Brussels, where thye met with senior officers from the Belgium Ministry of Finance and the European Investment Bank.

The debt-for-nature swap initiative, led by US-based non-governmental organisation The Nature Conservancy (TNC), involves donors buying back part of the country’s debt at a concessional rate and using the surplus money to pay for conservation initiatives rather than continue to pay debt service and interest fees from the original loan.

The civil society-led Seychelles Conservation and Climate Adaptation Trust (SeyCCAT) is expected to focus on structuring and easing the debt swap and then using the funds generated from the repayment of the loan towards developing sustainable conservation programmes for the country.

Funds would then flow in and out of the trust, which will manage the cash-flow from the debt swap and run an annual call for proposals for coastal and marine related projects to strengthen Seychelles resilience to climate change and the long term sustainable development of the country.

Through this process, Seychelles is also expected to produce its first-ever marine spatial plan, which will see parts of Seychelles’ vast Exclusive Economic Zone (EEZ) earmarked as replenishment zones.

The proposed global approach for providing debt relief to Small Island Developing States (SIDS) is a multi-year commitment of roughly US $500 million to US $1 billion of commercial and/or bilateral debt for climate adaptation in marine ecosystems swaps over the next twenty years.

The proposed debt swap was among the items discussed between Seychelles President James Michel and HRH The Prince of Wales, Prince Charles in Sri Lanka at the Commonwealth Heads of State Meeting in 2013.