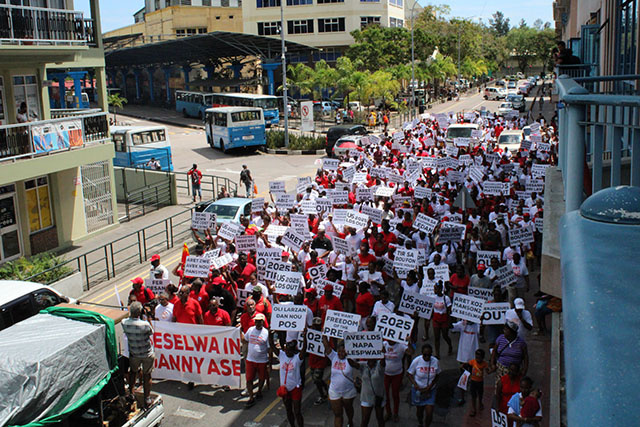 This is the first time that the United Seychelles party has organised such a gathering in the capital. (Rassin Vannier, Seychelles News Agency)

(Seychelles News Agency) - Hundreds of opposition demonstrators marched peacefully through the streets of Victoria, the capital of Seychelles, to protest against the cost of living on Saturday.

This is the first time that the United Seychelles (US) party has organised such a gathering in the capital.

"The objective of this demonstration is to say that some decisions that are taken by the LDS government are not good for the Seychellois people, we see more and more capitalist and liberal decisions where those who are rich, are getting richer, and those who are poor, are getting poorer," Dr Patrick Hermine, president of the United Seychelles party told SNA.

The Seychelles opposition, which lost the 2020 presidential and parliamentary elections for the first time, is planning to hold further demonstrations next year to protest against the constitutional amendments that the government would like to put in place.

All of the party's leaders were present at the march.

United Seychelles is also planning to mobilise its supporters on the islands of Praslin and La Digue.

"Since I took over the leadership of the party, many thought that the party would collapse, but this is not the case," said Dr Hermine, adding that the party has managed to remobilise.

"The government is using the media to paint a rosy picture of Seychelles and that is not the case," Dr Herminie said.

"We see a large segment of our population deteriorating and a minority who have businesses in agriculture and construction getting by, we see a growing gap between rich and poor and that is what we are fighting against," said Herminie.

The next presidential and legislative elections are scheduled for 2025.