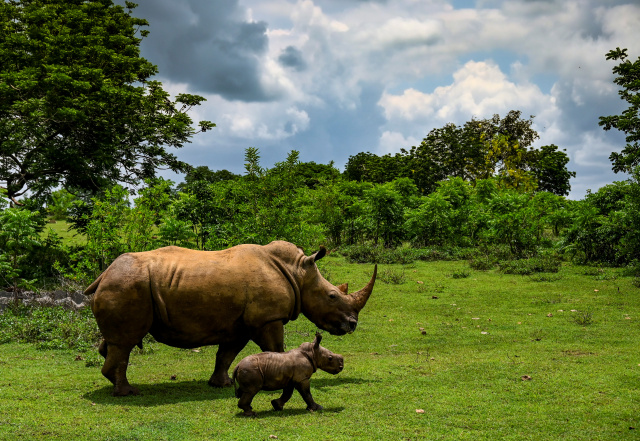 (FILES) In this file photo taken on June 23, 2022 A white rhino calf strolls with its mother in the African Grassland, at the National Zoo of Cuba in Havana, on June 23, 2022. Conservation experts and delegates from more than 180 nations taking part in thw global wildlife summit in Panama, began the week with a decision to maintain a ban on the trade of white rhinoceros horn, despite a request from Eswatini, backed by Japan and several other African countries. (Photo by YAMIL LAGE / AFP)

Here are some highlights of the two-week meeting of the Convention on International Trade in Endangered Species (CITES) in Panama.

No longer just the villains of the deep, these ancient predators were the stars of the summit.

Delegates from more than 180 countries agreed to regulate the trade in 54 species of the requiem shark and hammerhead shark families.

These species are the most hunted for their shark fins -- seen as a delicacy in some Asian countries -- and their numbers have been decimated, putting the entire marine ecosystem at risk.

Only Japan grumbled over the resolution, arguing restrictions on the trade of the blue shark would be a blow to the livelihoods of its fishermen.

CITES also voted to restrict the trade of guitarfish rays and several other freshwater ray species.

The skin of these nocturnal amphibians can be lime green or so translucent their organs are visible through their skin.

This has made them sought-after pets, and intense trafficking has placed the species in critical danger.

CITES also placed more than 160 species of glass frog, found in several rainforests in Central and South America, on its Appendix II, which places trade restrictions on threatened species.

The European Union and Canada withdrew early reservations about the resolution, which was adopted unanimously.

CITES approved varying levels of protection for around 20 turtle species from America and Asia.

These include the striking matamata turtles, with their prehistoric, beetle-like appearance, which have also become sought-after pets and are hunted for their meat and eggs.

They live in the Amazon and Orinoco basins, but scientists do not know how many there are.

Freshwater turtles are among the most-trafficked species in the world.

Brazil and the Philippines now will be able to export farm-raised crocodiles, after a total trade ban was lifted.

Delegates also allowed the export of skin and meat of the broad-snouted caiman -- found in the wild in the Brazilian Amazon and Pantanal as well as wetlands, rivers, and lakes of neighboring countries.

"The population of these animals is very big. There has been a great reproductive success," said researcher Miryam Venegas-Anaya, a crocodile expert with the University of Panama.

In the Philippines, a trade restriction was lifted on the saltwater crocodile that lives mainly on the islands of Mindanao and Palawan.

However, Thailand's efforts to lift a ban on its Siamese crocodile was rejected.

Zimbabwe and its southern African neighbors have seen their elephant populations soar in recent years, and pushed a drive to re-open the ivory trade which has been banned since 1989.

One-off sales were allowed in 1999 and 2008 despite fierce opposition.

However, in the rest of the continent poaching for ivory is still decimating elephant populations and the request was rejected.

Meanwhile, after a fierce debate, a request by ten west African nations to ban the trade in hippopotamus, was rejected by delegates.

Illegal trade in the surly semi-aquatic mammal -- for its meat, ivory tusks, teeth, and skull -- rose after elephant ivory was banned.