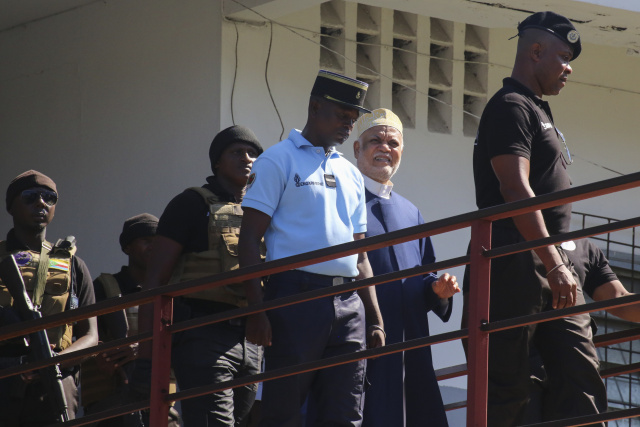 (FILES) In this file photo taken on November 21, 2022 Former Comorian President Ahmed Abdallah Sambi (2nd R), escorted by Gendarmes, arrives at the courthouse in Moroni. Former Comorian President Ahmed Abdallah Sambi, tried for high treason by the State Security Court, was sentenced to life imprisonment on November 28, 2022, the President of the Court announced during a hearing.
The decisions of this special court cannot be appealed.
Sambi, 64, appeared briefly on the first day of his trial last week, to denounce a procedure in his eyes unfair, then was absent from the rest of the proceedings. (Photo by Ibrahim YOUSSOUF / AFP)

(AFP) - A court in the Comoros on Monday handed down a life sentence for high treason to ex-president Ahmed Abdallah Sambi, who was convicted of selling passports to stateless people living in the Gulf.

Sambi, 64, an arch rival of President Azali Assoumani, was sentenced by the State Security Court, a special judicial body whose rulings cannot be appealed.

"Sambi is sentenced to life imprisonment," court president Omar Ben Ali said, reading out the verdict, which also stripped the former leader of the right to vote and hold public office.

"The court orders his property and assets to be confiscated to the benefit of the public treasury."

Sambi was convicted in absentia after refusing to attend proceedings.

He briefly appeared at the first hearing, where his lawyers unsuccessfully asked the judge to recuse himself as he had previously sat on the panel that indicted their defendant.

"The composition of the court is illegal. I do not want to be tried by this court," Sambi said before boycotting further sessions.

"This sentence is entirely consistent with what we have seen so far, a judicial charade guided by members of the government which ended in life imprisonment for the biggest political opponent of the current regime", Sambi's daughter Tisslame Sambi told AFP.

Sambi, who led the small Indian Ocean archipelago between 2006 and 2011, pushed through a law in 2008 allowing the sale of passports for high fees.

The scheme aimed at the so-called bidoon -- an Arab minority numbering in the tens of thousands who cannot obtain citizenship.

The former president was accused of embezzling millions of dollars under the scheme.

"He betrayed the mission entrusted to him by the Comorans," public prosecutor Ali Mohamed Djounaid told the court last week as he requested a life sentence.

The prosecution said the loss to the public purse amounted to more than $1.8 billion -- more than the impoverished nation's GDP.

"They gave thugs the right to sell Comoran nationality as if they were selling peanuts," said Eric Emmanuel Sossa, a lawyer for civilian plaintiffs.

But Sambi's French lawyer Jean-Gilles Halimi said "no evidence" of missing money or bank accounts had been put forward to suggest a crime.

Sambi was originally prosecuted for corruption, but the charges were reclassified as high treason, a crime that "does not exist in Comoran law," Halimi said.

The former president had already spent four years behind bars before he faced trial, far exceeding the maximum eight months. He was originally placed under house arrest for disturbing public order.

Another lawyer, Mahamoudou Ahmada, said the court went beyond prosecutors' requests in stripping his client of his civil rights.

Government secretary general Daniel Ali Bandar said he was "satisfied" that the trial had gone ahead "peacefully" but was waiting to see what would happen in civil proceedings.

"More than prison sentences, Comorans want to know what happened to the millions of euros that have been embezzled," he said.

Among other defendants, French Syrian businessman Bashar Kiwan, who had accused the government of seeking to pressure him into testifying against Sambi -- something denied by the presidency -- was sentenced to 10 years.

Both men were convicted in absentia. The authorities issued international arrest warrants for both men.

Sambi studied in Saudi Arabia, Sudan and in a theological school in Iran, and typically dressed in the traditional garb of Iranian clerics -- a style that gave him the nickname of "ayatollah."

A former French archipelago of three islands of some 900,000 people located northwest of Mozambique, the Comoros has endured years of political turmoil.

Since independence in 1975, the country has endured more than 20 attempted coups, four of which were successful.

Assoumani seized power in 1999 and was re-elected in 2016 in a vote marred by violence and allegations of irregularities.

He was able to extend his term thanks to a controversial referendum in 2018 that changed the constitution.