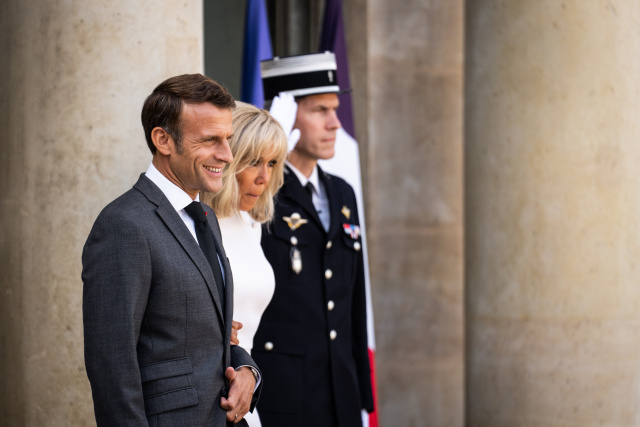 (AFP) - French President Emmanuel Macron heads to Washington Tuesday to discuss a slew of issues with US counterpart Joe Biden, ranging from aligning policy on Russia's invasion of Ukraine to easing trade spats.

Macron, in a rare honour the first French leader to be invited for two US state visits, can look forward to another 21-gun salute and ostentatious White House dinner that ex-president Donald Trump provided in 2018.

His travelling entourage of foreign, defence and finance ministers, as well as business leaders and astronauts, illustrates the range of transatlantic cooperation Paris hopes to push forward.

But one senior American official told AFP that while there might be concrete "progress" in some fields, "this visit is about the personal relationship, the alliance relationship" with France.

"There are enormous opportunities to cooperate between the Biden administration and the Macron government," said Martin Quencez, deputy director of the Paris office of think-tank GMF.

"But for various reasons, cooperation and coordination haven't gone as far as one might imagine".

The tone between Paris and Washington has calmed since a year ago, when the United States snatched a lucrative contract to supply Australia with submarines from under French noses -- and launched a new US-UK-Australia alliance in the Pacific, dubbed AUKUS, that excluded France.

This week's visit could be seen as the capstone of US efforts to placate a NATO ally which is one of the strongest voices calling for European "strategic autonomy", said Celia Belin, a researcher at the Brookings Institution.

"The French aren't always easy to manage, but when the French and the Americans agree, that moves things forward a great deal."

As things stand, however, "we are not allies on the same page," one adviser to Macron told AFP, promising "challenging" talks with Biden.

Despite his support for Kyiv, Macron's insistence on continuing to talk with Moscow throughout Russia's invasion of Ukraine has raised American hackles.

Another adviser told reporters last week that Macron would speak to Russian President Vladimir Putin soon -- but not until after his US visit.

The conversation comes just as some US officials including Pentagon chief Mark Milley have raised the possibility of a negotiated peace.

Putin's war has also set France and the United States at odds on the economy, intensifying existing disagreements over issues like the green transition and competing with China.

Massive US weapons deliveries to Ukraine -- far outstripping the combined efforts of the European Union -- have highlighted the country's pre-eminence as an arms producer, while Franco-German joint efforts flounder.

That could be highlighted still further if a divided US Congress refuses to authorise the same level of aid to Kyiv from next year.

And as the United States plans massive investments and subsidies under its Inflation Reduction Act (IRA), Europeans fear distorting effects on competition with their own firms in sectors like electric cars, batteries and clean energy.

Macron will tell Biden "there's a contradiction between an administration that constantly talks of alliances... and at the same time takes a decision like the IRA that will impact allies' economies and industry," researcher Quencez said.

A senior Biden administration official, speaking on condition of anonymity, stressed that even with the disagreements, the transatlantic partnership remains strong.

On divergences over the more hawkish US policy towards China, the official said European views are "not identical, but I think there is a strong view that we should be speaking from a common script in response to China."

As for US subsidies for domestic green technology companies, the official said they do not shut out EU competitors and that a "very constructive set of conversations" was underway on how to work together.

A joint statement last week from finance ministers in Berlin and Paris underscored the "urgent need for investments in Europe" to reduce energy dependencies and tackle climate and digital transitions.

The communique was read by some observers as potentially heralding a wave of EU subsidies.

In the immediate term, Europeans are angered by the swingeing prices they must now pay for US exports of ship-borne liquefied natural gas -- replacing cheaper Russian pipeline gas cut off during the invasion of Ukraine.

France in particular has suffered a double energy blow as much of its fleet of nuclear power plants is offline for maintenance or due to flaws uncovered in their cooling systems.

With Luc Remont, the newly installed head of state-controlled energy firm EDF, on Macron's plane to Washington, some support for the civil nuclear industry could be on the cards.

Macron is also expected to announce a fund to support French language teaching on a later leg of his visit that will take him to New Orleans.