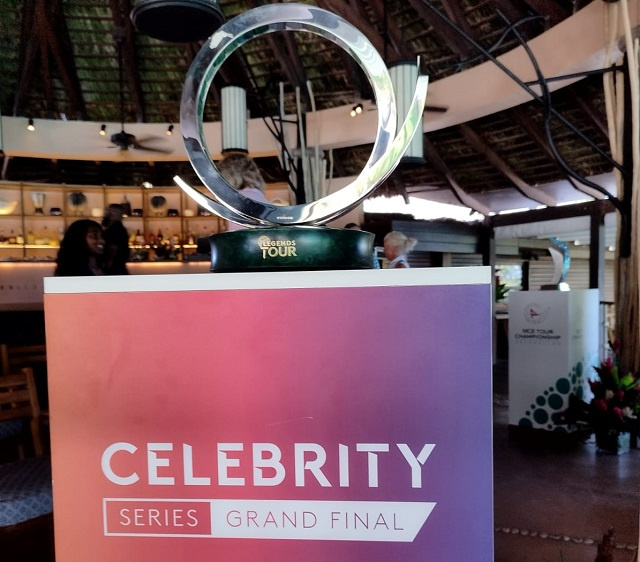 The event teed off on Wednesday with the celebrities looking to claim the €100,000 prize, which they aim to give to charity. (Sedrick Nicette, Seychelles News Agency)

A group of 10 international celebrities from sports, media and entertainment will battle in the Grand Final of the Celebrity Golf Series which is being held alongside the MCB Tour at the Praslin Constance Lemuria golf course in Seychelles.

The event teed off on Wednesday with the celebrities looking to claim the €100,000 prize, which they aim to give to charity.

At the launching of the side event at the Lemuria Resort on Tuesday, local media were introduced to the celebrities.

Among the celebrities is a former member of the Irish boy band, Boyzone, Keith Duffy, who is today an actor and singer in the duo Boyzlife. Duffy is the winner of the inaugural tour, held in Mauritius. He defeated sporting legends like Paul Lawrie, Gavin Hastings, Gordon Strachan, and Teddy Sheringham.

Duffy, the defending champion of the tour, told reporters that with him not being a sportsman there are some advantages as he will not feel the same pressure to win, as the ex-sportsmen, who are very competitive.

"I will be playing for a charity which was set up for children with autism, as I myself have a daughter who suffers from the condition and so we want to ensure they have all the help that they need, so they can live as normal a life as possible," he explained.

Despite Duffy being the defending champion, most participants believe that Gianfranco Zola is the favourite to win due to his low handicap score.

"Everyone has already won just by being and competing for their charities, but having said that, of course, me being competitive, I will be trying to win," said Zola, who will put his possible winnings into research being done on multiple sclerosis in a centre in Milan.

Bingham is the only lady competing in the tour and like Duffy, she is not a former professional athlete.

"I think I have a bit of an advantage as a woman, as the course is quite short. But you can never underestimate ex-sportsmen, as they never lose their competitiveness and will always want to win," she said.

With all the celebrities playing for charity, Bingham said that she is targeting support for families with members suffering from cancer as well as support for patients at the end of life.

Other activities in the celebrity tour will be a football fiesta at the Praslin Amitie stadium as part of the community activities. The event, a joint effort with the Seychelles Football Federation and National Sports Council, will take place on December 2 and will include a children's clinic and friendly match.

Four of the celebrity guests who were former footballers will participate in the event to engage with the young Seychellois athletes.

There will also be an Autism Focus Day Event, where the Mauritius Commercial Bank (MBC), Keith Duffy and Damon Hill will be present. The aim of the event is to raise awareness about autism and how it affects people with this condition and their loved ones.

The event will be held at the Autism Association Centre at North East Point on Mahe, the main island.

Sport » Be a reporter: Write and send your article » Subscribe for news alert
Tags: Constance Lemuria

Seychelles gears up for Christmas festivities