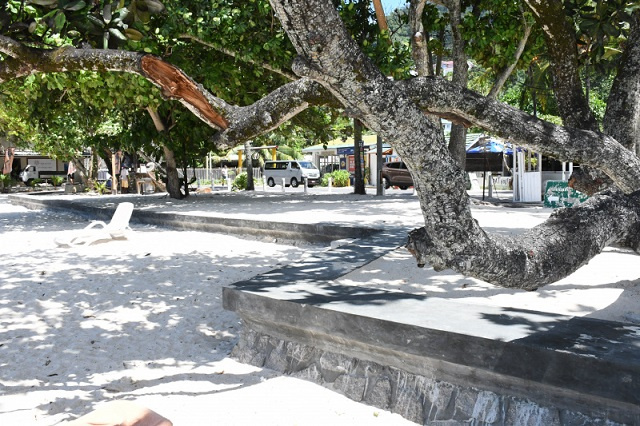 The sea wall at Beau Vallon will be extended from the La Plage restaurant to the outdoor gym in front of Savoy Resort and Spa. (Seychelles Nation)

The second phase of two coastal rehabilitation projects in Seychelles will kick off next year, while the island nation eyes a new blue barrier concept in its fight in mitigating coastal erosion, said a top official.

The senior climate adaptation officer at the Climate Change Division, Anie Simeon, told SNA on Wednesday that this will be the continuation of two sea walls - one at Anse Gaulette, Baie Lazare, and the other at Beau Vallon.

"We did not have the funding to do the whole stretch in one go. Once completed the wall will extend to the corner that leads to the nearby shop. There is around 150 metres more to go from where it is today," said Simeon.

On the Beau Vallon project, she said that this will entail the continuation of the sea wall starting from the La Plage restaurant until the outdoor gym in front of Savoy Resort and Spa.

Simeon shared that the biggest challenge the division encounters when it comes to coastal rehabilitation is the resistance or lack of cooperation from the public.

"At Anse Gaulette we encountered a delay as we were having problems obtaining way leave from all private landowners along this coast. When the road started detaching from the dune land, the project became urgent and we had no choice but to proceed with the project where we had gotten the signatures. For phase two we still need some more signatures," said Simeon.

The over 280-metre sea wall currently being constructed at Anse Gaulette was initiated in 2021 but construction only started in August. The first phase is expected to be completed by mid-December and is costing SCR5.3 million ($403,000).

The second sea wall, located opposite the Boat House restaurant at Beau Vallon, was completed last month at cost of SCR2 million ($152,000). Funded under the Environment Trust Fund, the construction of the around 170-metre-long sea wall also had its challenges.

"The biggest challenges we encounter come from the public where they do not accept the projects that we bring forth. At Beau Vallon there were a lot of complaints coming from the public, however, the same people who were complaining are the ones appreciating the completed project," she said.

In an article in Seychelles Nation, President Wavel Ramkalawan said he is satisfied with the projects adding that "the Beau Vallon sea wall has gone exactly as planned, and we all understand why it was necessary." He made this statement during a visit to the site, which took place on November 29.

"The whole area is now protected from degradation and nothing will be built here. We will now beautify the place, and install benches to make it a nice leisure spot where people can sit and enjoy the view and sunset," he said.

With coastal erosion becoming a major menace to Seychelles' coastal infrastructure and beaches, the Climate Change Division will build an artificial reef off the coast of Cote D'Or, Praslin - Seychelles' second largest island.

"There will also be a blue barrier concept that will be built in the sea at Cote D'Or but this is still under discussions to secure funding. This project will prevent waves from breaking on the shore and at the same time target the rehabilitation of the coral reef through coral restoration," said Simeon.

On the same island, rock armouring is expected to be undertaken at Anse Kerlan near the airport. The department will also be doing a lot of tree planting activities as a form of nature-based solution to help with the coastal erosion problem, especially in areas that have a sufficient buffer to the main road infrastructure.