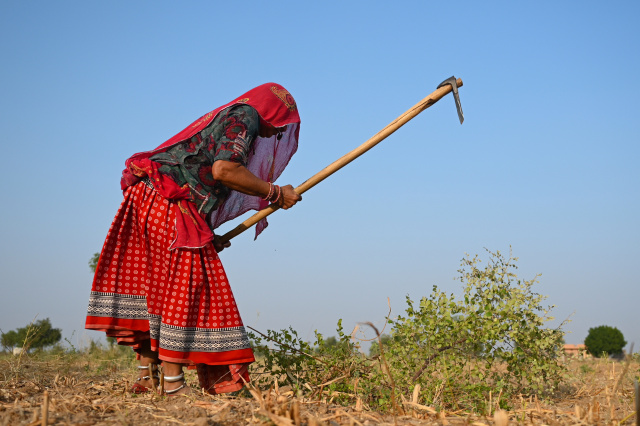 In this photograph taken on November 14, 2022, a woman from the Bishnoi community works in a field in Bhawad village, some 30 kms from Jodhpur in the northern Indian state of Rajasthan. The Bishnois are India's original eco-warriors, believes in the sanctity of all life, shunning meat and avoiding felling living trees. Spread mostly in hamlets across Rajasthan, the community draw inspiration from Amrita Devi, a Bishnoi woman killed in 1730 while trying to protect a khejari -- now the state tree. (Photo by Money SHARMA / AFP)

(AFP) - Delegates from nearly 200 countries meet in Montreal next week to hammer out a new global biodiversity deal to protect ecosystems and species from further human destruction.

The meeting follows crucial climate change talks in Egypt in November, where leaders failed to forge any breakthroughs on scaling down fossil fuels and slashing planet-warming emissions.

Observers are hoping the COP15 biodiversity talks in Montreal will deliver a landmark deal to protect nature and reverse the damage humans have done to forests, wetlands, waterways and the millions of species that live in them.

Around 50 percent of the global economy is dependent on nature, but scientists warn that humanity needs to drastically -- and urgently -- rethink its relationship with the natural world as fears of a sixth era of mass extinction grow.

"Our planet is in crisis," said Elizabeth Maruma Mrema, the head of the UN Convention on Biological Diversity (CBD), at a briefing ahead of the talks, adding that a global agreement on biodiversity was "crucial to ensure that the future of humankind on planet Earth is sustained".

So far, humanity has proven woeful at this, with one million species at risk of extinction.

The so-called post-2020 biodiversity framework, delayed by two years because of the pandemic, will map out an official plan for nature until mid-century for most countries, with the exception of the United States, which has not signed up.

But it comes after countries failed to meet a single one of the targets set for the previous decade.

With new rules affecting key economic sectors -- including agriculture, forestry and fishing -- and covering everything from intellectual property to pollution and pesticides, delegates are grappling with an array of sticking points.

So far, only two out of the 22 targets in the new deal have been agreed upon.

"We have to admit that success is not guaranteed," an EU source close to the talks said. "We have a very difficult situation ahead of us."

While China currently chairs COP15, it is not hosting this year's meeting because of the ongoing pandemic.

Instead, it will be held from December 7 to 19 in Montreal, home of the CBD, which oversees the negotiations.

Canada's Prime Minister Justin Trudeau is the only world leader attending. Chinese President Xi Jinping has not said he will join, and neither side has invited other leaders to come, with time quickly running out.

Observers fear the leaders' absence sucks the momentum out of the negotiations and could scupper an ambitious final deal.

Divisions have already emerged on the key issue of financing, with wealthy countries under pressure to funnel more money to developing nations for conservation.

A group of developing nations, including Brazil, South Africa and Indonesia, this year called for rich countries to provide at least $100 billion annually –- rising to $700 billion a year by 2030 -- for biodiversity.

But many Western nations are reluctant to create a distinct fund for nature.

Currently, most biodiversity funds for the developing world come from existing funding mechanisms, which often also include climate finance.

On Thursday, the UN Environment Programme said investments for nature-based solutions must increase to $384 billion per year by 2025, more than double the current figure of $154 billion per year.

Another fight is brewing over the issue of "biopiracy", with many mainly African countries accusing wealthy nations of pillaging the natural world for ingredients and formulas used in cosmetics and medicines, without sharing the benefits with the communities from which they came.

So far, more than 100 countries formally support the goal, according to the EU-backed High Ambition Coalition which tracks the target.

The new goal will rely heavily on the involvement of indigenous peoples, who steward land that is home to around 80 percent of Earth's remaining biodiversity, according to a landmark UN report on climate change impacts this year.

"It's not going to work if indigenous peoples are not fully included," Jennifer Tauli Corpuz of the non-profit Nia Tero told AFP.

"We completely lose the integrity of the document", added Corpuz, who is part of the indigenous caucus to the talks.

Other items in the framework: elimination or redirection of hundreds of millions of dollars in harmful government subsidies; promoting sustainable farming and fishing, reducing pesticides; tackling invasive species and reforestation.

But implementation is perhaps the most crucial agenda item to ensure the pledges made are actually carried out by governments.

"We need goals and targets that are measurable and they need to be related to clear indicators," the EU source said, calling for "robust monitoring, planning, reporting and review".