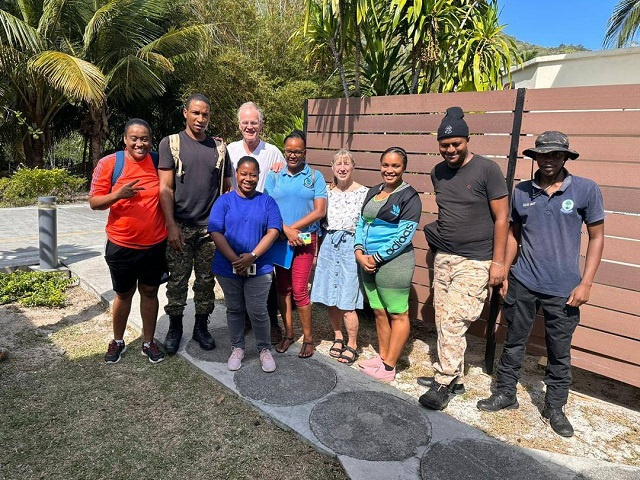 The 63-year-old German (3rd from left back row) was found by police officers looking for him on the beach. (Seychelles Police Force/Facebook)

A German male national who was reported missing on Silhouette Island earlier this week has been found, the Seychelles Police said in a communique on Wednesday.

According to the communique, the 63-year-old was found by police officers looking for him on the beach not far from the tourism establishment where he was staying.

The German national had gone on the Anse Mondon trail at 1.30 p.m. with his wife and a colleague. He decided not to return by boat around 5.30 p.m and went on the trail alone to return to the establishment but got lost.

Meanwhile, the search for a 61-year-old German national reported missing on La Digue last month has resumed after a "new development in the case" surfaced, the police force said in a recent press statement.

Marco Viole was reported missing to the police on November 5, after he was last seen around Anse Fourmis on a bicycle. He arrived in Seychelles on November 3 with his wife and the two were vacationing on La Digue, Seychelles' third most populated island. On November 12, the police abandoned searches at sea and on land for the man.

Police officers from different sections together with officers from the Seychelles Fire and Rescue Services Agency (SFRSA) reinitiated search operations on La Digue on November 29.

SNA contacted the police, however, no further information was provided with regards to the new development that caused the search for Viole to resume.

In a press release on Thursday, the police said that during their search operation they noticed that some signs giving directions to the trail have been broken and some removed completely.

According to the police, since the start of November, four visitors have gotten lost or gone missing on La Digue trails, out of which three have been rescued.

The case of Viole is the only one remaining unsolved.