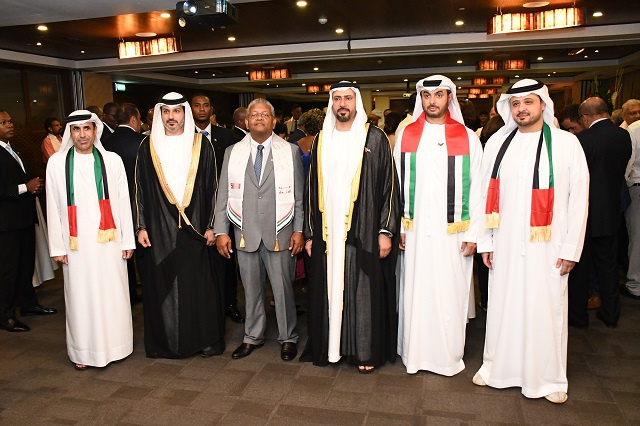 Seychelles' foreign affairs minister, Sylvestre Radegonde, hailed the 40 years of excellent relations between the island nation and the United Arab Emirates at an event to celebrate the 51st Anniversary of the UAE.

The event on Thursday at the Savoy Resort and Spa was held in the presence of Seychelles' President Wavel Ramkalawan and was also attended by former President Danny Faure, top government officials and members of Seychelles' diplomatic corps.

The UAE gained its independence from Britain on December 2, 1971, after the rulers of Abu Dhabi, Dubai, Sharjah, Umm al-Quwain, Ajman and Fujairah agreed on a Federal Constitution and joined together to form the United Arab Emirates.

The United Arab Emirates' Chargé d'Affaires, Ahmed Saeed Al Neyadi, and Radegonde raised a toast to each other's countries and their leaders at the celebration.

"As we enter 2023, Seychelles' economy is getting stronger as it recovers from the pandemic. This progress would not have been possible without the help of dependable partners like the UAE, which in December 2020, was the first country to make a donation of vaccines, followed by a second donation in February 2021. These generous donations allowed Seychelles to re-open its doors and assist in the recovery process of our tourism industry. For this we are grateful," said Radegonde.

He expressed the government's gratitude for the decision by the UAE to implement the second phase of the Barbarons housing project which will include a batch of 40 units and noted "the tremendous progress that the UAE has made over the past 51 years."

On his side, UAE's Chargé d'Affaires hailed the relationship between Seychelles and his country, which he said has evolved over the years as a strong strategic partnership with the leaders working together for the betterment of their peoples.

He outlined UAE's strategic road map for the future and said that it "seeks to become a "global capital for investment and economic renovation, and in this regard, the UAE has undertaken major reforms to prevent financial crimes and in line with the international standards to combat money laundering."

Al Neyadi added that UAE's decision to support literacy for women is not only within the union but also globally and mentioned the significant financial investments it has made in that area.

He also mentioned the recent visit of the President of the UAE, Sheik Mohammed bin Zayed Al Nayan, to the Seychelles and the two leaders' common agenda towards environment conservation and renewable energy.

He reiterated the union's commitment to continue cooperating with Seychelles in all areas.

Seychelles and the UAE established relations in 1982 and over the past four decades, the Arab nation has assisted the archipelago in the western Indian Ocean in various fields in health, housing, education, and finance, among others.

The UAE has also recently provided a grant for the construction of a modern hospital on La Digue, the third most populated island.