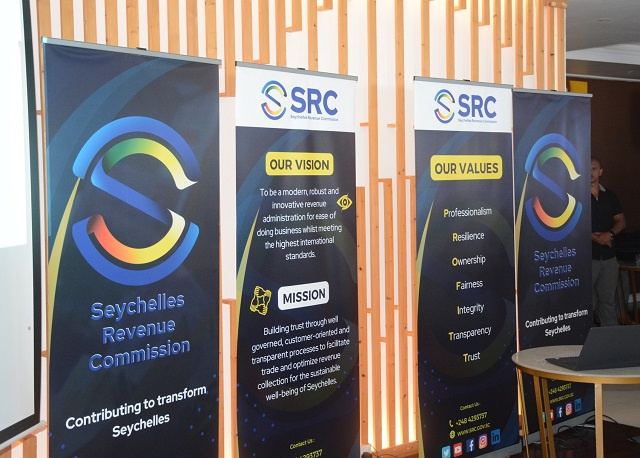 The Seychelles Revenue Commission (SRC) has launched its new strategic plan and outlined its way forward from 2023 to 2025 in a ceremony to mark its 13th anniversary since its creation on Friday.

At the event held at the Hilton Labriz Gastrolounge, SRC's new logo was also revealed along with a new tax registration platform called the Seychelles Tax Portal.

Taxpayers can now access the new portal at www.tms.gov.sc  to register their businesses and obtain their tax identification number within 24 hours after their online registration. The new SRC's website to access other services is www.src.sc

A copy of the new strategic plan was handed to Seychelles' President Wavel Ramkalawan by SRC's chairperson, Chrystold Chetty.

In her address, the commissioner general, Veronique Herminie, said, "As we celebrate the 13th anniversary of the creation of the Seychelles Revenue Commission, I think that it is rather fitting that SRC embarks on this innovative journey to transform itself and the public perception of us as a revenue administration."

The new strategic plan also features a new vision, mission and values for the coming years of SRC, the body responsible for the administration of revenue laws in Seychelles, an archipelago in the western Indian Ocean.

The Minister for Finance, National Planning and Trade, Naadir Hassan, said that the new strategic plan is the launching pad for a rebranding of SRC and is "a holistic approach in repositioning the organisation to better play its role in supporting the economic development of Seychelles."

He added that the new portal should now facilitate the efficiency with which SRC delivers its services for optimum revenue collection and reduction in compliance costs of businesses.

During the event, SRC also unveiled the name for its new building "Maison Manglier' which will be its headquarters once completed. The foundation stone for the building was laid in a ceremony on June 29, Seychelles' National Day, close to the International Conference Centre (ICCS) on Bois de Rose Avenue.

The winner for the name of the building was Verna Lesperance, who said that she was inspired by the abundance of mangroves found alongside Bois De Rose avenue where the SRC building will be built.

The winner of the SRC logo competition, Velma Cafrine, was also rewarded for her design of a creative ribbon-style sketch depicting the acronym of SRC in colours reflective of the Seychelles flag.