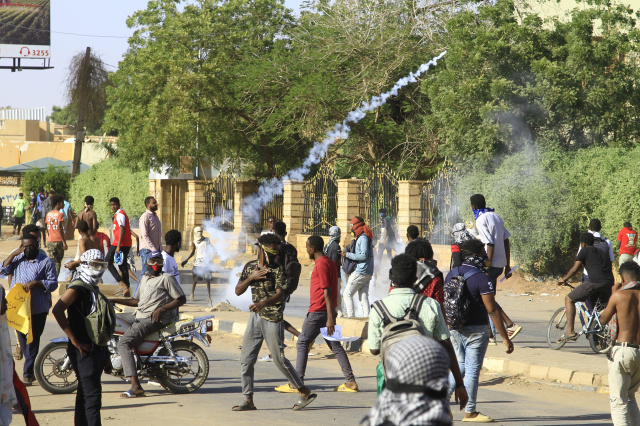 Sudanse security forces fire tear gas on protesters during a demonstration calling for civilian rule and denouncing the military administration, in the capital Khartoum's twin city of Umdurman, on November 30, 2022. (Photo by Ebrahim Hamid / AFP)

(AFP) - Sudan's military and civilian leaders signed Monday an initial deal aimed at ending a deep crisis that has gripped the northeast African country since a coup a year ago.

The past year has seen near-weekly protests and a crackdown that pro-democracy medics say has killed at least 121, a spiralling economic crisis and a rise in ethnic violence in several remote regions.

Divisions among civilian groups have deepened since the coup, with some urging a deal with the military while others insist on "no partnership, no negotiation".

Monday's deal was signed by Burhan, paramilitary commander Mohamed Hamdan Dagalo and multiple civilian groups, most notably the Forces for Freedom and Change -- the main civilian faction that was ousted in the coup.

The deal -- based on a proposal by the Sudanese Bar Association -- was negotiated in the presence of officials from the United Nations, Western diplomats as well as Saudi Arabia and the United Arab Emirates, according to the FFC.

In a first phase, "the framework agreement lays the groundwork for establishing a transitional civilian authority," said the FFC, noting that other civilian groups also signed.

A final deal tackling issues including transitional justice and reforms to the military should be completed "within weeks," it said.

However, that part is far thornier, with observers questioning whether the military would be willing to give up economic interests and wider powers that it views as its privileged domain.

Phase one of the deal "is a very low level commitment on Burhan's part... allowing him to survive" politically, said Kholood Khair founder of the Confluence Advisory, a Khartoum-based think-tank.

But the signatories will likely face "a real political crisis as they start talking in earnest about security sector reforms, transitional justice (and) financial accountability," she added.

Monday's signing comes months after Burhan pledged that the military would step aside and make way for factions to agree on a civilian government.

Pro-democracy activists reject the latest effort and are calling for new street protests demanding the military return to barracks.

Several former rebels who signed peace deals with Sudan in 2020 also voiced their opposition to the deal.

Mohamed Zakaraia, spokesman for former rebel group the Justice and Equality movement, told AFP that it "will bring about dire consequences and further complicate the political scene".