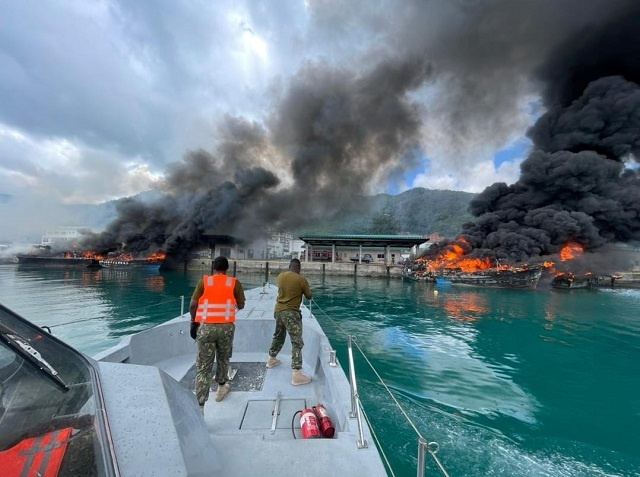 The fire started around 10 a.m. when the crew of one of the boats was doing some work on it. (Seychelles Defence Forces/Facebook)

(Seychelles News Agency) - A fire completely destroyed seven artisanal fishing vessels in Seychelles, berthed along the fishing port quay at Providence on the main island of Mahe on Monday but no casualty was reported.

The fire started around 10 a.m. when the crew of one of the boats was doing some work on it. Due to the sea drift and the fact that the port was congested, the fire quickly spread to other boats alongside.

The Seychelles Fire and Rescue Services Agency (SFRSA) deployed some 25 firefighters to deal with the incident with the assistance of the Seychelles International Airport fire services, the Seychelles Coast Guard and the police, while ambulances were also on standby for any possible casualty.

The public relations officer of the SFRSA, Jones Madeleine, told the press that within a matter of minutes the fire had flared into a very serious situation.

"Since the boats were mostly made from fibreglass and had fuel in their tanks, it made for a highly combustible scenario and this is why the smoke which emanated from the fire was thick and dark," said Madeleine.

Along with the boats at the landing shed at the port, the fire also destroyed high technical equipment used for ensuring that the landing catch meant for exportation met the strict European Union and other international standards.

Aubrey Lesperance, who is in charge of the fishing port's management from the Seychelles Fisheries Authority (SFA), said they have already initiated a plan for a makeshift replacement shed with the go ahead of the fire services, so as to have as little disruption in the normal procedures as possible.

"We will put up a tent as a temporary replacement for the landing shed and SBS [Seychelles Bureau of Standards] will assist us in carrying out the quality assurance as per usual," he added.

Lesperance said that SFA has already started to clean the affected area and is "also conducting testing on samples of ice and also the quality of the seawater, as there are seafood processing plants in the area, to test for possible pollution as fuel did pour into the sea from the damaged boats."

He added that while SFA is yet to carry out a total assessment and put a figure to the damage caused by the fires, those types of fishing vessels can be worth a minimum of SCR700,000 ($50,000) to SCR 1 million ($70,000) each. Additionally, the loss of equipment in the landing shed would also carry a stiff cost.

The fishing port at Providence normally caters to up to 60 fishing vessels, but the space is still limited and the SFA has already announced that it plans to extend it.

He also said the fishers who have lost their jobs as a result of the fire will be financially assisted.

The fishing port at Providence, which caters to increased artisanal and semi-industrial fishing activities in Seychelles, was financed by the government of Japan at a cost of $11.52 million.