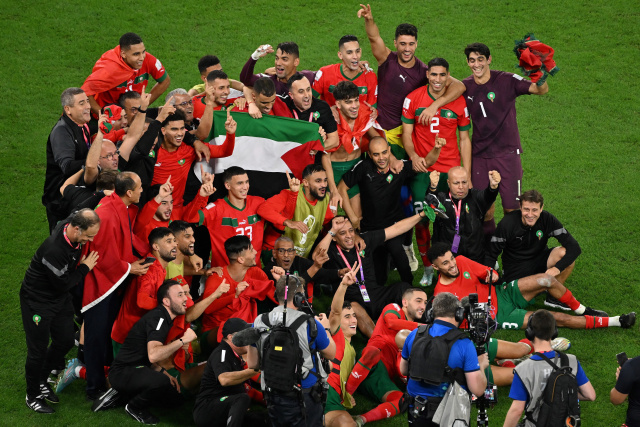 Morocco's players celebrate at the end of the Qatar 2022 World Cup round of 16 football match between Morocco and Spain at the Education City Stadium in Al-Rayyan, west of Doha on December 6, 2022. (Photo by Glyn KIRK / AFP)

(AFP) - Thousands of Morocco fans descended on the streets of Doha to celebrate their country becoming the first Arab nation to reach the World Cup quarter-finals on Tuesday.

Despite some minor trouble outside the stadium, the victory over Spain became a celebration of "Arab pride" for supporters from across the region.

Walid Regragui's side won 3-0 in a penalty shootout after the match finished goalless following extra-time.

So many people packed Doha's central Souq Waqif market -- a traditional gathering point for World Cup fans -- that police sealed it off just before midnight, with thousands waiting in groups at different entrances.

Copying the celebration of Moroccan players inside Doha's Education City Stadium, many fans waved Palestinian flags, stepping up a political show of solidarity that has marked this World Cup.

"This is the first World Cup on Arab territory and we are carrying the Arab flag in this tournament," said Yussuf Akram, who waved Moroccan and Palestinian emblems in the crowded Souq alleys.

Saudis, Qataris and Egyptians joined the celebrations, waving their countries' flags in the traditional market as police gathered around the edge.

"This is a matter of pride, we are all happy for Morocco," said Aysha Bedawi, who came from Cairo to watch World Cup matches.

"It does not matter which team reached this stage, as long as there is one Arab team there we still have hope."

The prospect of playing Portugal in a quarter-final did not worry supporters who chanted "bring on Ronaldo" outside a TV studio set up in the Souq.

"If Morocco can beat Spain, who have been world champions, then they can handle Cristiano Ronaldo," said Mohamed Benyoub, a Moroccan living in Qatar.

"I cried when the game finished, I never thought I would see something like this."

Organisers said police had to move in to stop "unticketed fans" beating down a stadium boundary fence to gain entry. No injuries were reported.