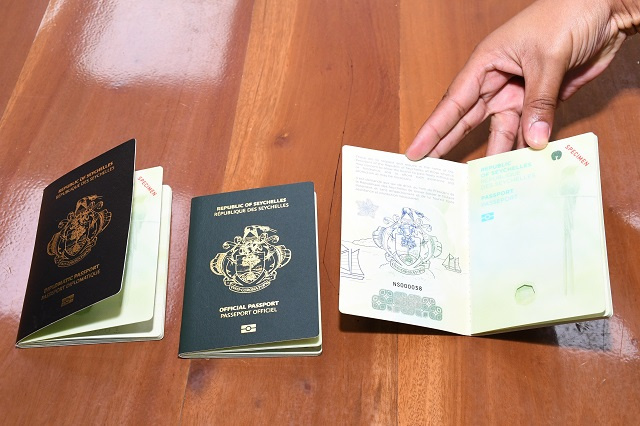 (Seychelles News Agency) - Citizens of Seychelles have, since last month, received for the first time a new biometric passport. The biometric passport has a microchip with data such as fingerprints, facial recognition and digital signature elements.

The new passport proudly bears some key environmental and cultural features related to the island nation’s natural and historical heritage.

In this week’s Buzz, SNA presents 7 of the key features on this new passport including the flora and fauna of the country.

Endemic to the second most populated island of Praslin, the black parrot, which is really greyish brown in colour, is listed as vulnerable on the International Union for the Conservation of Nature’s (IUCN) Red List due to its small population.

According to an estimate in 2013, there were then 520 to 900 black parrots on Praslin, however, a more recent estimate in 2018 by the Seychelles Islands Foundation puts the bird's population between 1096 and 1742 birds.

The orchid, also known as the "comet orchid", can be seen on the planes of the national airline – Air Seychelles.

In 2018, the tropicbird orchid featured on the Duchess of Sussex’s wedding veil in actress Meghan Markle’s marriage to Prince Harry, the Duke of Sussex.

The 15-foot silk tulle veil incorporated embroidered flowers from each of the 53 member states which form the Commonwealth, which is now headed by King Charles III of the United Kingdom.

The white-tailed tropicbird is one of the most emblematic birds of Seychelles, found on the coat of arms of the island nation. This native species is a white pelagic seabird with a long tail.

These seabirds undertake long foraging trips, and the islands of Seychelles, are the main breeding ground for white-tailed tropicbirds with an estimated 6500 breeding pairs, representing 56 percent of the western Indian Ocean breeding population.

A mischievous and conniving tube-shaped plant that traps small insects and animals, the pitcher plant can be found on the mountains of the main island of Mahe and the third largest island, Silhouette.

A rebel of the botanical world that does things in its own way, the pitcher plant is a carnivorous plant, its prey is attracted to the fragrant odour of the plant.

The Aldabra giant land tortoise from Aldabra Atoll in the Seychelles – 115 islands in the western Indian Ocean -- is one of the largest tortoises in the world.

Historically, giant tortoises were found on many of the western Indian Ocean islands and fossil records indicate giant tortoises once lived on every continent and many islands with the exception of Australia and Antarctica.

Aldabra - one of the world’s largest atolls - is a UNESCO World Heritage Site.  It is home to a population of endemic giant Aldabra tortoises which fluctuates to around 100,000, which is approximately the same size as the human population of Seychelles.

The atoll is 34 km long and 13 km wide with a large and shallow lagoon covering an area of 196 square kilometres, larger than the main island of Mahe. The atoll is considered one of the most biologically diverse and undisturbed raised coral atolls in the world.

One of the most iconic historical features of Seychelles, the Victoria Clock Tower, is 119 years old. It was erected on April 1 in 1903 in the centre of Victoria, the capital of the island nation.

A landmark dating back to the colonial era, the clock tower was erected in memory of Queen Victoria, who died in 1901.