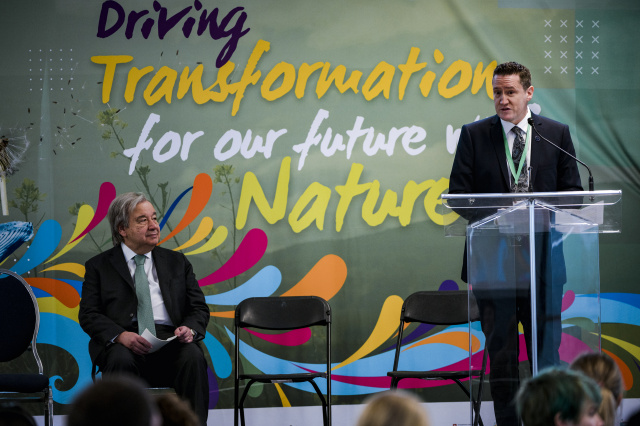 (AFP) - High-stakes UN biodiversity talks open in Montreal Wednesday, in what is being billed as the "last best chance" to save the planet's species and ecosystems from irreversible human destruction.

Delegates from across the world gathered for the December 7-19 meeting to try to hammer out a new deal for nature: a 10-year framework aimed at saving the planet's forests, oceans and species before it's too late.

"With our bottomless appetite for unchecked and unequal economic growth, humanity has become a weapon of mass extinction," UN chief Antonio Guterres warned Tuesday at a ceremony ahead of talks.

Before he took the dais, a group of around half a dozen Indigenous protesters interrupted a speech by Canadian Prime Minister Justin Trudeau, in a sign of the passions inflamed by biodiversity loss among the most impacted communities.

The official opening of the meeting, known as COP15, follows several days of pre-negotiations that saw very little progress on key issues, sparking fears parties may walk away without a good deal.

Observers called for negotiators to urgently unblock sticking points on difficult items like finance and implementation, with only five out of more than 20 targets agreed so far.

The summit "is probably the last best chance for governments to turn things around for nature, and to rescue our precious life support system," Bernadette Fischler Hooper, head of international Advocacy at WWF, told reporters Tuesday.

Draft targets for the 10-year framework include a cornerstone pledge to protect 30 percent of the world's land and seas by 2030, eliminating harmful fishing and agriculture subsidies and tackling invasive species and reducing pesticides.

Finance is among the most divisive issues as developing nations are demanding increased funding for conservation.

Earlier this year a coalition of nations called for wealthy countries to provide at least $100 billion annually –- rising to $700 billion a year by 2030 -- for biodiversity.

Some countries want to set up a separate funding mechanism for biodiversity, which wealthy nations have largely resisted.

The sticky issue of biopiracy is also causing roadblocks, as many mainly African countries demand that wealthy nations share the benefits of ingredients and formulas used in cosmetics and medicines derived from the Global South.

Implementation has emerged as another sticking point in recent days, with disagreements over how to ensure any final deal is put into practice -- unlike its predecessor agreed in 2010.

"There is significant resistance to having the robust monitoring and review mechanisms that we feel is necessary," said a European source close to negotiations.

The meeting, delayed two years because of the Covid pandemic, follows crucial climate change talks in Egypt last month that ended with little headway on reducing emissions and scaling down the use of planet-warming fossil fuels.

China is chair, though it is being hosted in Canada because of Beijing's long-standing zero-Covid policy.

But China's President Xi Jinping will be a no-show along with all other world leaders apart from Canada's Trudeau -- opting to visit oil-rich Saudi Arabia this week instead.

NGOs say the lack of world leaders at COP15 risks dampening momentum at the talks and could scupper an ambitious settlement.

Elizabeth Mrema, the head of the UN's Convention on Biological Diversity (CBD), which oversees the talks, on Tuesday urged "give and take" among negotiators, calling for "flexibility, compromise and consensus."

The talks come amid dire warning from scientists that the world is facing its biggest mass extinction event since the dinosaur age, with more than one million species at risk.

Human activity has decimated forests, wetlands, waterways and the millions of plants, animals and insects that live in them, with half of global GDP in some way dependent on nature.

With so much on the line, observers are calling for a "Paris moment" for nature -- an ambitious deal in line with the landmark climate accord.