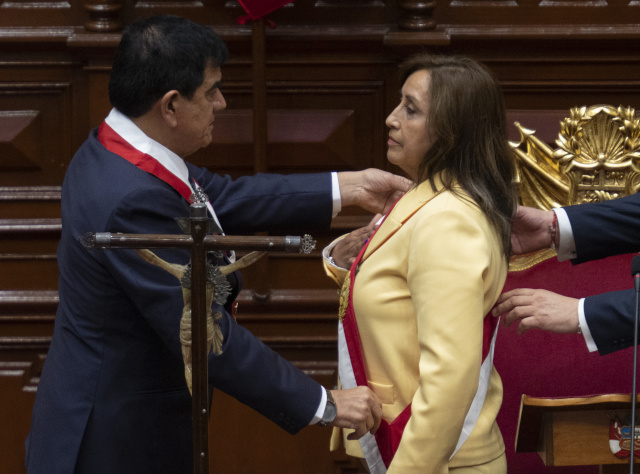 President of the Peruvian Congress Jose Williams Zapata (L) swears in Dina Boluarte (R) as the new President hours after former President Pedro Castillo was impeached in Lima, on December 7, 2022. Peru's Pedro Castillo was impeached and replaced as president by his deputy on Wednesday in a dizzying series of events in the country that has long been prone to political upheaval. Dina Boluarte, a 60-year-old lawyer, was sworn in as Peru's first female president just hours after Castillo tried to wrest control of the legislature in a move criticised as an attempted coup. (Photo by Cris BOURONCLE / AFP)

(AFP) - Peru's new President Dina Boluarte was under pressure Thursday to calm the political turmoil in the country, a day after the dramatic arrest of her predecessor, who stands accused of attempting a coup.

The South American country's first-ever woman leader asked the opposition for a truce as she prepared to form a government, as doubt hung over her ability to survive the political firestorm ignited by Pedro Castillo.

Castillo on Wednesday tried to dissolve parliament and rule by decree, but his efforts were quickly stamped out by lawmakers who voted him out of office in a dizzying day of high drama, by the end of which former vice president Boluarte had emerged as the country's new head of state.

She took the oath of office within two hours of the impeachment vote, donning the presidential sash in front of Congress and vowing to serve out the rest of Castillo's term, until July 2026.

In her first words as president, she called for "national unity" and urged lawmakers to put aside their ideological differences, in a tacit reference to the confrontation between Castillo's leftist government and the right-wing dominated Congress.

The 60-year-old lawyer must now form her first ministerial cabinet, which will be an early indication of whether she is likely to survive in office.

Her initial appointments will signal the support she can muster for her government. If she is unable to rule, calls will grow for her resignation or the calling of early elections.

Earlier in the day, Castillo had faced his third impeachment attempt since the former rural schoolteacher unexpectedly won power from Peru's traditional political elite 18 months ago.

In a televised address, the 53-year-old announced he was dissolving the opposition-dominated Congress, imposing a curfew and would rule by decree for at least nine months.

As criticism poured in over the speech, lawmakers defiantly gathered earlier than planned to debate the impeachment motion and approved it with 101 votes out of 130 lawmakers.

Castillo had left the presidential palace after the vote with the intention of seeking asylum in Mexico's embassy before he was arrested, according to a police report published by local media.

By Wednesday night, Castillo had been transferred to a police facility in east Lima, where graft-convicted former president Alberto Fujimori -- himself removed by Congress in 2000 -- is serving out his sentence.

Authorities said he was staging a power grab.

Hundreds of Castillo's supporters protested outside the Lima police headquarters after his impeachment, clashing with police who fired teargas to quash the demonstrations.

"Shut Congress, nest of rats," read one of their signs.

Meanwhile, those opposed to the former president burned t-shirts bearing his image.

"We are tired of this corrupt government that was stealing from day one," said 51-year-old Johana Salazar.

The European Union expressed its support for the "political, democratic and peaceful solution adopted by the Peruvian institutions," and urged "all actors to a dialogue that ensures stability," according to a statement.

UN Secretary-General Antonio Guterres "calls on the parties involved to uphold the rule of law, as well as to remain calm and refrain from inflaming tensions," his spokesman said in a statement.

Without her own political party in Congress, Boluarte is facing an uphill battle to stay in power.

"She has no party in Congress, she is alone," Peru's former president Ollanta Humala told local television on Wednesday night.

"She does not have the tools to govern, she should call for an early election," added Humala, who was in office from 2011 to 2016.

"Today's truce will last a month or maybe more, but then the country's big problems will come to the fore."

But right-wing political heavyweight Keiko Fujimori, the daughter of ex-president Fujimori, said her party would support the new president.

"Let's hope that the president appoints a broad-based cabinet, a very good cabinet and we must all do everything possible to make it work well," she tweeted.