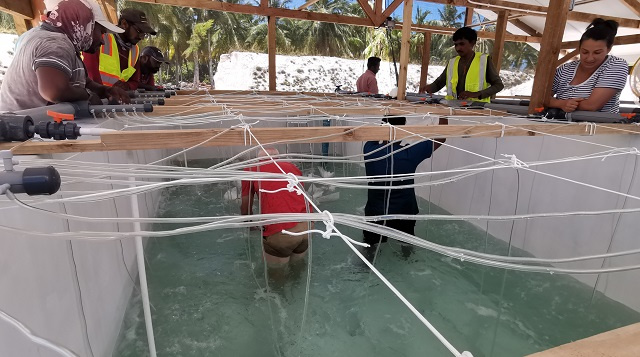 The first consignment is a planned pilot project that will enable IDC to identify issues and mitigate potential risks. (IDC)

A planned pilot project for prawn farming has started on Seychelles' Coetivy Island with the arrival of a first batch of the whiteleg shrimp post-larvae, Islands Development Company (IDC) said on Wednesday.

According to IDC, the first batch of 150,000 whiteleg shrimp post-larvae, imported by air freight from Singapore, landed in Seychelles on Wednesday and was transported directly to Coetivy.

"Initially, the post-larvae will be placed in one of two newly built nursery tanks for four weeks before being transferred to a grow-out pond for at least three months before being harvested. This follows over a year of renovations of nine, previously existing, half hectare ponds located in the north of the island," said IDC.

The first consignment is a planned pilot project that will enable IDC to identify issues and mitigate potential risks before undertaking full-scale production.

"In line with IDC's commitment to promote the sustainable development of the Outer Islands using innovative practices, a biofloc farming system is being trialled. This system, which involves recirculating culture water and reduces the need for high water exchange, prevents waste and nutrients from being released into the environment," said IDC.

The project is the first step to relaunch prawn production on Coetivy Island, which is expected to become one of the leading local contributors to the Seychelles' blue growth agenda.

Once fully operational, the prawn farm on Coetivy is expected to produce at least 200 tonnes of prawns annually which represent the total local annual consumption and will be exclusively for the domestic market.

Two species of prawns will be farmed - whiteleg shrimp and black tiger prawns.

Prawn farming is not new to the 115-island archipelago in the western Indian Ocean. In 1989, in collaboration with the Seychelles Marketing Board (SMB), IDC developed a black tiger prawn farm on Coetivy Island, with broodstocks imported from Madagascar and Mozambique. The farm, however, was deemed not profitable and ceased its operations in 2009.

In a previous interview, the principal aquaculture officer at the Seychelles Fishing Authority (SFA), Aubrey Lesperance, told SNA that Coëtivy Island was found to be the most suitable site in Seychelles for commercial prawn farming because it already has a lot of suitable characteristics in place.

Coetivy is a coral island 290km south of the main island of Mahe. The island was traditionally used for agriculture and up to 2006 it had the nation's only aquaculture plant for prawn farming. After that, it was used as a prison facility.

Fisheries » Be a reporter: Write and send your article » Subscribe for news alert
Tags: prawn farming