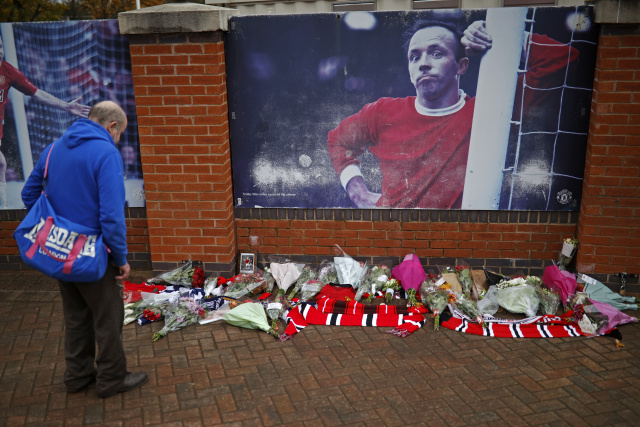 Scarves and flowers are left in honour of the late Manchester United and England midfielder Nobby Stiles outside Old Trafford in Manchester, northwest England, on November 1, 2020. Nobby Stiles, whose celebratory dance on the Wembley pitch holding the World Cup trophy in one hand and his dentures in the other, and described as the "heart and soul" of England's 1966 World Cup winning team, has died, aged 78. Stiles was a tough-tackling midfielder and an integral part of the Manchester United side under Matt Busby who became the first English club to win the European Cup in 1968. ( AFP / POOL / PHIL NOBLE)

(AFP) - Footballers are more likely to develop worse brain health beyond the age of 65 than the population at large, according to a study published Friday.

The SCORES project, based at the University of East Anglia in eastern England, uses online systems to assess individuals' cognitive function and monitor brain health decline.

While it found footballers in the 40-50 age group were performing better in the assessments than the general population, this did not hold true as they aged.

The SCORES report data follows research by the FIELD study at Glasgow University, which found footballers were three-and-a-half times more likely to die of neurodegenerative disease than similarly aged members of the population.

That research also led to renewed calls for greater protection for players from concussion and the long-term impact of repeatedly heading a football.

And while the physical exercise associated with being a footballer helped players with their brain health in the years soon after their retirement, that benefit lessened over time.

"When they get to 65 -- that's when things are starting to go wrong," said lead SCORES researcher Dr Michael Grey.

"The over-65s performed worse when assessed for things like reaction time, executive function, and spatial navigation. These are early warning signs for deteriorating brain health."

Dr Grey added the SCORES study planned to follow their group of footballers for the rest of their lives.

"This will give us a really clear picture of the potential damage caused by heading the ball," he said, while adding a larger sample size was needed to produce further conclusions.

The study currently includes 55 former players aged 65 and over, whose results were compared to the 27 non-playing members of the study group aged 65 and over and also to a normative group containing thousands of participants amalgamated from other studies who have done the same tests.

SCORES -- which stands for Screening Cognitive Outcomes after Repetitive head impact Exposure in Sport - is also trying to collect more data from former female footballers, amid fears they could be at even greater risk of dementia than their male counterparts.

The family of 1966 England World Cup winner Nobby Stiles are among a group of players and their relatives' families planning to sue the Football Association over their failure to protect players from brain injuries.

Stiles died in October 2020 aged 78 having suffered from dementia. He was found to have chronic traumatic encephalopathy, a progressive brain condition caused by repeated blows to the head.

While boxing has long been a focus of concern, given it allows punches to the head, other sports are now confronting the issue of brain injury.

For example, Steve Thompson is one of scores of rugby union players taking legal action against several governing bodies for negligence.

The 44-year-old, a member of the England team that won the 2003 Rugby World Cup, has been diagnosed with early onset dementia.