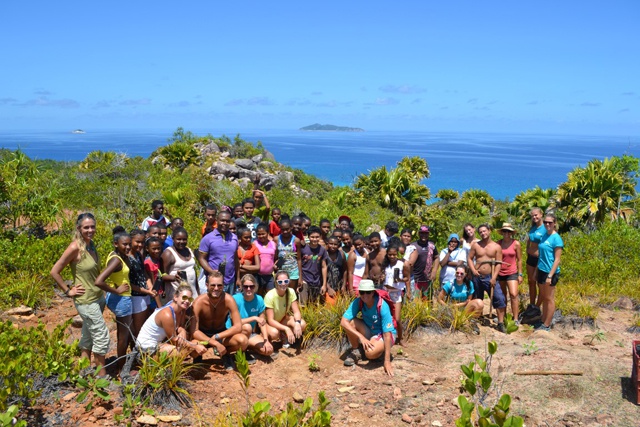 (Seychelles News Agency) - When the island of Curieuse was discovered in the mid-18th century, it was first named “Ile Rouge” due to its distinctive patches of bare red earth dotted around the island. A casualty of several major fires throughout its history, the island’s phosphorous-rich soil showed through, leaving the island at risk of soil erosion.

But over the past few weeks, two youth groups sent scores of young but willing volunteers to assist NGO group Global Vision International (GVI) and the Seychelles National Parks Authority (SNPA) to rehabilitate the higher barren areas of the island by planting thousands of endemic plants.

Curieuse, situated just off the coast of the second-largest Seychelles island of Praslin, is one of only three places in the entire world where the suggestively-shaped coco-de-mer, the largest nut in the world, grows naturally, the other two being the UNESCO World Heritage site of the Vallee de Mai, and the private reserve of Fond Ferdinand, both on Praslin.

The Base Manager of GVI Curieuse, Daniel Davies, told SNA that in 1771, French explorers searching for the legendary 'sea coconut' or coco-de-mer set the island on fire so that they could harvest the nuts more easily, leaving the scrubby landscape even more sparsely vegetated than before.

In recent years, however, the SNPA have been using Curieuse as a pilot area for the rehabilitation of its endemic and indigenous plants as a part of an ambitious climate change strategy that aims to promote education and awareness regarding climate change, as well as actively work towards mitigating the impacts of climate change on the Seychelles islands’ unique ecology and biodiversity.

“The hope is that the rehabilitation programme will help to encourage further indigenous vegetation to grow back on the island naturally, thereby covering the bare earth areas and returning Curieuse to a flourishing island rich in native fauna and flora,” said Davies.

Realising that the younger generations are tomorrow’s future leaders, SNPA and GVI actively sought out the participation of the youth in the rehabilitation programme with the aim of not only the physical re-vegetation of Curieuse but also the education the programme’s importance among young people in local communities.

So far, Davies says two youth organisations have come to help with the re-vegetation of Curieuse. The first was a group of 45 youths from the Seychelles Scouts Association who came and helped plant on some of the higher areas of the Badamier Trail on Saturday November 8.

The following Saturday, a group from the JJ Spirit Foundation came along to help with re-planting along the higher reaches behind the back of the Doctor’s House on Anse St Jose.

“Both days were a lot of fun and we all managed to plant a lot of trees all together,” said Davies.

The Seychelles National Park Authority and their forestry team, GVI and various community groups are working to plant a target of 14,000 plants at various locations around the island.

“The children were all very keen and eager to participate in the planting process and it was made sure that all had the chance to put a plant into the ground,” reported Davies, who said that the children were all shown how to handle the delicate seedlings, how to transfer the plant from its plastic container to the soil, and finally how to secure the plant in the ground by gently compressing the soil and making sure the seedling was upright.

“The children were informed of the various types of plants that were being planted, and the importance of spreading the various species around the designated area so as to improve success rates.”

Davies estimates that it will take around two to three years for the plants to grow tall enough to be considered having endured the harsh conditions found on Curieuse, although he warns that some of the plants may not survive.

Echoes of a sad past

GVI have been working on Curieuse Island for almost six years at the invitation of SNPA. The island is unique in many ways due to its interesting and varied biodiversity, most notably its natural coco-de-mer palms, its population of Aldabra giant tortoises, nesting green and hawksbill turtles on many of the island's beaches and also the mangrove system that has interestingly developed in the centre of the island.

Curieuse is also notable for its history as a leper colony from 1833 until as recently as 1965. The remains of the buildings used to house the unfortunate lepers can still be seen, and the physician’s residence, appropriately named the Doctor’s House, has been transformed into a museum and educational centre for visitors.

“The history of Curieuse is all around us, with our camp being situated in some of the old colony buildings where the female patients lived,” he said. “It is fascinating to be living amongst such an important part of Curieuse's history, and we are reminded every day of how they would have lived on this island, similar to the way we do.”

GVI primarily functions through a small team of permanent staff, mostly scientists, who lead conservation surveys aided by a small team of ‘voluntourists’ – volunteers from abroad who come to experience and learn about the wildlife of the Seychelles.

Davies, who hails from London in the UK, has been stationed as Curieuse’s Base Manager since February 2014 – a job he says has very few downsides.

“The island is amazing and beautiful, and the people I get to meet and interact with on a daily basis are incredible,” he told SNA.

“It can be quite difficult when we have a very busy schedule, in terms of surveys to undertake, and the weather turns for the worst, meaning we can't get out into the field as frequently as we would like. But that is not very often, as the Seychelles has beautiful weather most of the year round!”

Davies says getting out into the field and undertaking the surveys is the most satisfying part of his job.

“We all care deeply about Curieuse Island and only want the best for it in the future, and [we know] that the research we undertake and the data we collect is going to help SNPA to increase the conservation value of Curieuse Island,” he said.

“Talking of SNPA, another great aspect to the role is getting to work with the wonderful SNPA Rangers who share the island with us as a home - the Seychellois are a happy, friendly and beautiful people who always make you smile and feel welcome – it makes living here an extra pleasure!”

One day, when Davies is old and grey, he says his experiences of living and working on the island will provide useful anecdotes to tell his grandchildren.

“I think I would have to describe the way in which we live on the island - that we use solar panels to provide us with our electricity needs, that our water comes from naturally collected sources, and that we grow as much of our own vegetables and herbs as possible,” he said.

“Living as sustainably as possible is very satisfying, and we are all very proud of our camp. Also the fact that I only have to walk five steps and I'm in the most beautifully clear and warm sea water is pretty amazing to tell people - I hope my grandchildren get to experience living the way we do here at some point in their lives!”