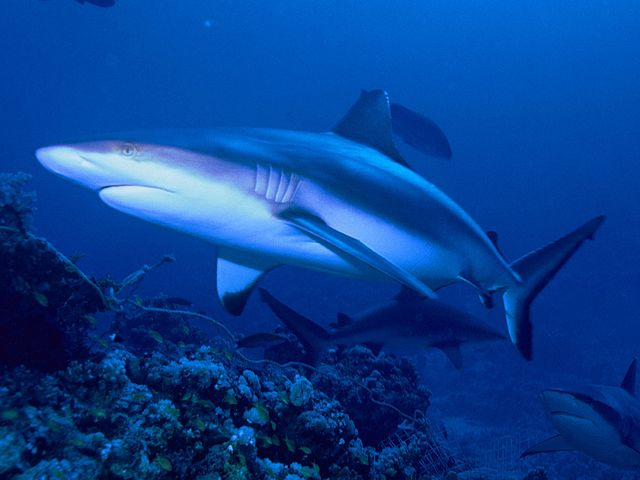 According to Govinden, the grey reef shark is the most common species being fished in Seychelles.(Albert Kok, Wikipedia) CC BY-SA 3.0

Seychelles exported 4,819.5 kg of shark fins in 2022 and most of the fins are generated in bycatch of semi-industrial fishing, said a top fisheries official.

The assistant manager for monitoring, control and surveillance at the Seychelles Fishing Authority (SFA), Ronny Malvina, said that there is only one Seychellois exporter of shark fins and SFA currently does not register fishers specifically for the fishery of shark fins but it so happens that fishers catch sharks as bycatch.

Malvina said the sharks get trapped in the fishing boats' nets, but the vessels' owners have to report it.

"They have to register every shark that they caught that we presume is bycatch. If the shark is still alive it will have to be released into the sea and if it's dead it will have to be cut into pieces. Boats that are above 24 metres are not allowed to do shark finning but for those below 24 metres, SFA does not stop them from doing finning but the sharks should be cut into pieces first," explained Malvina.

The current law in Seychelles is against the act of throwing blood and other things in the sea that attract sharks.

On the question of regulation for shark fishing in Seychelles, Malvina, said that there is minimum control.

"I think the public should be educated on the role of sharks in the ecosystem and, therefore, act responsibly, rather than take an approach of regulation and formalisation," he said.

In a survey conducted by SFA in 2013 on artisanal fisheries, the authority found out that there are 20 different species of sharks in the waters of Seychelles, an archipelago in the western Indian Ocean. There are more sharks being caught in longline fisheries which fall under the industrial fishing sector.

According to the head of the fisheries research department at the SFA, Rodney Govinden, the grey reef shark is the most common species being fished in Seychelles. The species made up 30 percent of the catch in 2020. Other common species are the scalloped hammerhead shark, spinner shark and spot-tale shark.

Annually, SFA collects information on various sites about the catch through their catch assessment survey. This includes the fishing activity, gears used, and, as much as possible, the technicians record information on the size of sharks of the species.

The only type of shark protected under the law in Seychelles is the whale shark, but there are other species that are listed by the International Union for Conservation of Nature (IUCN) as vulnerable species.

In Seychelles, like elsewhere in the world, people tend to be afraid of sharks although shark attacks rarely happen.

During the period of October to March, sharks tend to swim towards the coast to give birth, SFA and the environment department are advising the public to be aware that there will be small sharks around. People are advised to stay out of the water, especially at dawn.

Usually, when people see sharks close to the shore they call the established Green Line. The only recorded call for 2022 was on December 21 when a caller reported spotting a shark in the bay of Anse La Mouche on the west coast of Mahe, the main island.

The senior conservation officer from the environmental department, Kevin Moumou, said the department is doing an educational and awareness programme on sharks.

Seychelles has signed the Convention on International Trade in Endangered Species of Wild Fauna and Flora (CITES), which is related to the commerce of endangered species globally. The environment department is also working with tourism officials to design shark boards to educate tourists on what to do and what not to do if they ever spot a shark close to the shore, and this is an ongoing project, said Moumou.