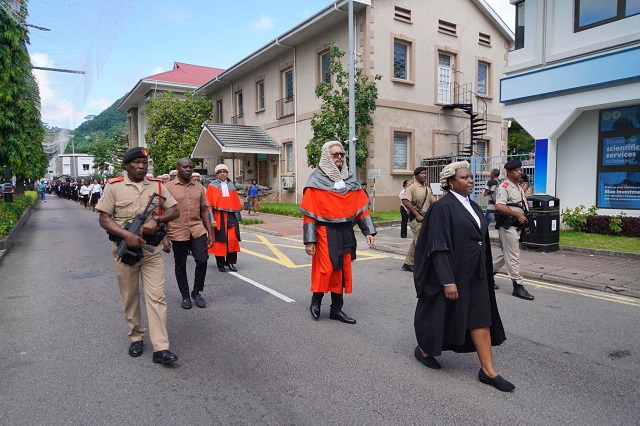 A procession of judges and magistrates on Independence Avenue in the capital of Victoria followed a church service. (Judiciary of Seychelles)

For the first time since the outbreak of the COVID-19 pandemic, the annual reopening of Seychelles' courts was carried out in accordance with its traditional format.

The ceremony started with a church service at the St. Paul's Anglican Cathedral followed by a procession of judges and magistrates on Independence Avenue in the capital of Victoria. An inspection of the guard of honour with the music of a brass band followed outside the Palais de Justice courthouse.

In his address to mark the occasion, Chief Justice Rony Govenden urged the executive and legislative to prioritise a newly drafted judicial bill allowing for the creation of an autonomous body with the power to self-discipline its members who commit different disciplinary offences.

"With the increase in the number of legal practitioners and legal activities, and the inefficiency of the Seychelles Bar Association in disciplining its own members, it is clear that there is a need to rethink the way that the system works in order for us to have a more accountable legal profession," said Govinden.

After seeking the input of the Attorney General and the Bar Association, the Supreme Court forwarded a Seychelles Law Society Bill to the government which provides for the establishment of an Executive Council.

As an autonomous body to which all lawyers would be members, the Law Society will have the ability to self-discipline its members, with sanctions provided to include disbarment.

"It is hoped that this would put us at par with most Commonwealth jurisdictions," said Govinden.

The Chief Justice also talked about the creation of a Small Claims Tribunal, a proposal brought forth by the Ministry of Finance.

It was outlined that the formation of such a tribunal will "help Seychelles in easing the doing of business by putting small cases before a special court with simplified procedures."

The tribunal is expected to relieve some pressure on the judiciary and Govinden said that "we are positively considering the proposal because we believe that this will help us to make the court process more expeditious."

Govinden said, "The goal is to reach a plateau where the backlog is a nominal percentage of the total cases, and the number of completed cases is largely on par with the number of cases filed."

He also called on the media to improve the form of reporting of court decisions and suggested that the media takes a more in-depth approach to what actually happened after reading the decision, especially those decisions that have public interest importance, instead of a knee-jerk approach.

"This will allow for less sensational reporting of the issues at hand. This would in turn generate more profound debates by members of the public on the bigger issues having to do with the cases," added Govinden.