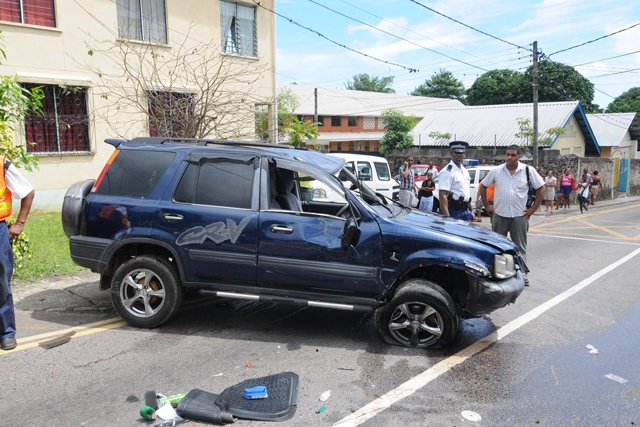 File Photo: Road accident in Seychelles. The police department has come up with the Arrive Alive campaign to educate those who are not abiding to the Road Traffic Laws and Regulations in a bid to reduce the number of accidents. (Joena Bonnelame, Seychelles News Agency)

(Seychelles News Agency) - A 48-year-old Seychellois man has been fined a total sum of 18,000 Seychelles rupees, sentenced to two months in prison and has had his driving license suspended for two years.

According to a statement issued by the Seychelles police on Friday, the man was convicted of reckless and dangerous driving as well as driving while under the influence of alcohol.

The truck driver was charged last Saturday after hitting and injuring two tourists in the northern district of Beau Vallon on the main island of Mahé.

The swift conviction came on the same day that a new campaign, dubbed ‘Arrive Alive’, was launched by the Seychelles police in a bid to target behaviour such as drunk driving, which is a major cause of road accidents.

“Lately the police has observed an increase in the number of drivers and passengers consuming alcoholic liquor on the public road, so the department has come up with the Arrive Alive campaign aimed at educating those who are not abiding to the Road Traffic Laws and Regulations,” said the Seychelles police Public Relations Manager Jean Toussaint at the launch event.

Toussaint explained that with the end of year festive season fast approaching, accompanied by typically high levels of alcohol consumption, there was no better time for such a campaign.

While ‘Arrive Alive’ will be focusing on educating the public on the many dangers of drinking and driving, the campaign will also be seeking to monitor the habits of road users.

There will be several educational drives, including television spots and banners, which will be erected across busy roads at regional levels on the main island of Mahé and the second most populated island of Praslin. There will also be posters and flyers with important information with regards to the country’s laws and regulations concerning alcohol consumption and road safety as well as advice for all road users, which will be distributed at district and community level.

To further deter motorists from consuming alcohol and driving, there will be random static road blocks and spot checks with breathalyzer tests performed on different roads on Mahé, Praslin as well as the third most populated island of La Digue, despite the latter having very few vehicles, targeting not only drivers but any person consuming alcohol in a vehicle.

The overall aim is to make public roads safer not only for motorists but pedestrians as well, which is expected in turn help to reduce the number of road accidents related to drunk driving.

“Road accidents in the Seychelles remain a problem due to the high traffic volume which occurs daily and also due to abuse of alcohol and the ignorance and disregard of the laws by motorists. Now we want to adopt a proactive, zero tolerance approach to drinking and driving offences,” said police Superintendent Sean Jacklin at the launching of the campaign.

“Rather than being reactive and breathalyzing drivers after an accident has occurred, we would attempt to identify and arrest drunk drivers prior to an accident, and hopefully prevent people from becoming victims of drunken drivers, hence creating a safer environment on our roads.”

The law enforcement authorities have announced that tougher measures will be imposed on motorists arrested and convicted of drunk driving. Those found guilty will now be fined 10,000 Seychelles rupees (around $700) or be sentenced to two years in prison or both and they could also face have their driving license suspended.

Speaking to SNA, Assistant Superintendent Wilson Denis, who is in charge of the traffic section within the police department, said on average over a hundred cases of road accidents are recorded across the main island of Mahé every month.

A total of 11 fatal road accidents have been recorded in Seychelles since the beginning of this year, already far-surpassing the total number of eight casualties recorded for all of 2013.

Acts of reckless driving, including speeding, texting or calling while driving, and drunk driving are the main causes of accidents.

During the launch of the Arrive Alive Campaign those present heard the testimony of a Seychellois victim of drunk driving, Linda Onezime, who was paralysed 16 years ago.

“At that time, my two children were still small and my whole life suddenly came to a halt,” she said. “It is not easy at all and thank God, I was able to fly to Singapore two days after the accident for treatment. My plea to all is: life is precious and when we have an accident, it is our family who suffers the most. Please do not drink and drive.”

According to Toussaint, the ‘Arrive Alive’ campaign will be run intensively over the next eight weeks, but added that the campaign would remain ongoing for the forseeable future.

Denis told SNA that the police will publish the statistics of the number of checks performed as well as the number of offences detected.

The Seychelles police are also receiving support from partners such as the Drug and Alcohol Council (DAC) in the form of television spots to constantly remind people of the dangers of drunk driving.

Alcohol-producing beverage manufacturers have also joined in, such as the makers of Takamaka Bay rum, Trois Freres Distillery, has sponsored the production of pamphlets and posters and the sole brewery in the Indian Ocean island archipelago, Seychelles Breweries Ltd (SBL) is running a parallel campaign and has also donated breathalyzers to the police.

High levels of alcohol consumption in the islands

The percentage of beer consumption in Seychelles also fell from from 85% of total alcohol consumed in 2011 to 67% in 2014, with more people opting instead for wines and spirits, a possible consequence of more imported alcoholic products being made available on the local market.

Commenting on the report that is based on data from 2010 to 2011, the Security Advisor at the Seychelles Ministry of Home Affairs and Transport Raymond St Ange told SNA in May this year that “now that we are in 2014 and noting the reports that come in from not only the police but as well other allied agencies concerned with alcohol consumption, and related abuse of same, I would say that consumption is back up.”

Seychelles has measures in place to limit alcohol consumption including the prohibition to sell alcohol to persons under the age of 18 as well as restriction on the sale of alcohol at the shops especially in the evenings and early morning, which took effect last year.

During weekdays for example shops are allowed to sell alcohol from 11.00am to 9.00pm Seychelles time.

For several years now the Seychelles government and NGOs have implemented awareness campaigns on the dangers of excessive alcohol consumption, reinforced by a national "Social Renaissance" campaign launched in July 2011 by Seychelles President James Michel who called on the “participation of everyone to address the social ills which are threatening the fabric of our society.”

The WHO’s Global Status Report on Alcohol and Health 2014 also found that the consumption of alcohol led to 3.3 million deaths around the world in 2012 and that globally, 16% of alcohol consumers indulge in heavy drinking sessions, otherwise known as binge drinking.

Excessive alcohol use not only leads to addiction, but it can put people at a higher risk of diseases such as tuberculosis and pneumonia. Binge drinking can also result in drunk-driving fatalities, domestic violence or risky sexual behaviour that could lead to a higher prevalence of unwanted pregnancies and sexually-transmitted diseases such as HIV.

The WHO aims to create more awareness on the dangers of alcohol consumption and has said it would like to see a 10% global reduction in harmful alcohol use by 2025.