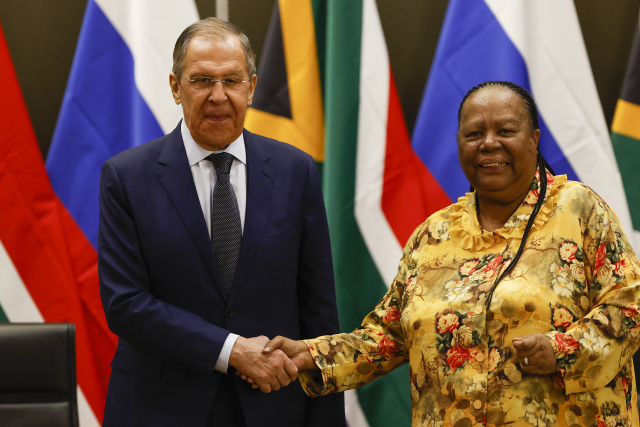 Russian Minister of Foreign Affairs of Sergei Lavrov (L) shakes hands with South African Minister of International Relations and Cooperation Naledi Pandor (R) during a press conference following their meeting at the OR Tambo Building in Pretoria on January 23, 2023. (Photo by PHILL MAGAKOE / AFP)

(AFP) - Russian Foreign Minister Sergei Lavrov was welcomed by his South African counterpart for talks in Pretoria on Monday, in a visit that has sparked criticism against the backdrop of the war in Ukraine.

A continental powerhouse, South Africa has refused to condemn Russia's invasion of Ukraine and resisted taking sides over the war.

The conflict has triggered sweeping Western sanctions against Moscow and attempts leave it diplomatically isolated.

South African Foreign Minister Naledi Pandor thanked Lavrov for the "most wonderful meeting" after the talks, which she earlier said would have helped "strengthen the already good relations" between the two countries.

Sitting alongside Moscow's top diplomat she described Russia as a "valued partner".

South Africa recently assumed the chairmanship of the BRICS, a grouping that also includes Brazil, Russia, India and China to challenge the dominant US and European-led global governance structures.

Last week, it announced it will host 10-day joint maritime drills with Russia and China off the port city of Durban and Richards Bay in February.

But the links with Moscow have triggered criticism in the country, with some accusing the government of having abandoned its neutral stance.

"It is becoming increasingly clear that the South African government is openly siding with Russia," said Darren Bergman, a lawmaker with the main opposition Democratic Alliance (DA) party.

"Friendly engagement" with Russia was "not appropriate" unless aimed at persuading it to end its involvement in Ukraine, he said.

Lavrov told a press conference that Russia did not "refuse negotiations" with Ukraine.

"But those who refuse must understand that the longer they refuse, the more difficult it is to find a solution," he said.

Officials in Moscow have blamed the closure of diplomatic channels on Ukrainian President Volodymyr Zelensky, who has said he will not negotiate while Russian leader Vladimir Putin is in power.

Despite the public overtures, the Kremlin has so far shown little willingness to soften its approach on the ground.

In Pretoria, members of Ukrainian community in South Africa held a small protest against the visit, with some waving signs reading "Go home Lavrov" and "Stop the lies! Stop the war".

Last week, the foundation of late South African Archbishop Desmond Tutu, a Nobel Peace Prize winner, called the planned naval exercises "disgraceful" and "tantamount to a declaration that South Africa is joining the war against Ukraine".

Pandor defended the drills, saying they were part of the natural course of relations between nations.

"All countries conduct military exercises with friends," she said.