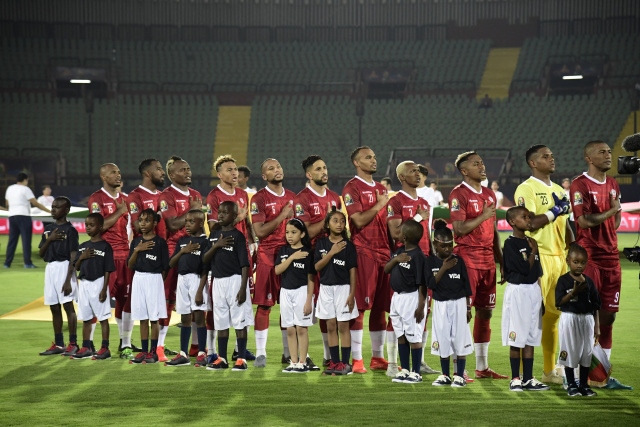 (FILE) Madagascar players sing their national anthem prior to the 2019 Africa Cup of Nations (CAN) quarter-final football match between Madagascar and Tunisia at the Al Salam stadium in Cairo on July 11, 2019. ( AFP / JAVIER SORIANO)

(AFP) - Debutants Madagascar swept into the African Nations Championship (CHAN) quarter-finals on Monday with a 3-0 drubbing of Sudan in Algeria.

Ghana progressed as runners-up and will face the Group E winners -- Cameroon or Niger -- in another fixture on Saturday.

Tokinantenaina Randriatsiferana put Madagascar 1-0 up after 13 minutes on a chilly night in the eastern city of Constantine, beating goalkeeper Mohamed Mustafa at his near post with a low shot.

Solomampionona Razafindranaivo doubled the lead on the half-hour with the goal of the match -- a superb lofted shot with the side of his foot over Mustafa.

Lalaina Rafanomezantsoa completed the rout three minutes later with a simple tap-in off a low cross after Mustafa had been rounded.

This is the second time Madagascar has made an instant impact in a CAF tournament after debuting in the Africa Cup of Nations (CAN) four years ago and reaching the quarter-finals in Egypt.

The CAN is open to home and foreign-based players while the CHAN is confined to footballers with clubs in their country of birth.

But despite the restrictions, CHAN matches are classified as full internationals with results counting toward the FIFA world rankings.

On Tuesday, the last two quarter-finals places will be filled after an Oran double-header in which Mali face Mauritania in Group D and Cameroon meet Niger in Group E.