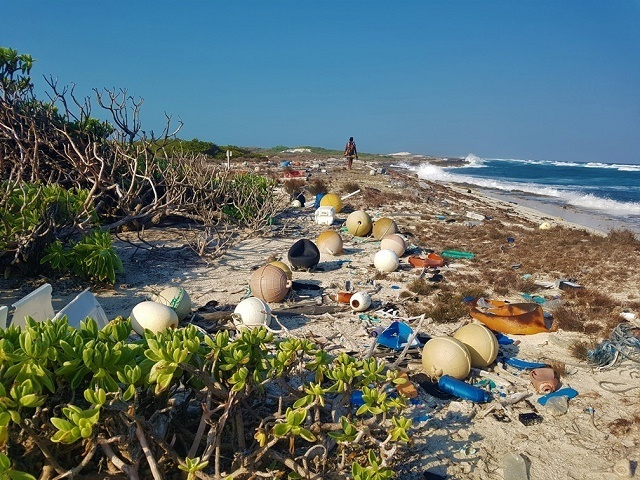 Plastic waste on the shores of the Aldabra atoll. (Seychelles Islands Foundation)

(Seychelles News Agency) - The primary source of plastic debris washing up on the shores of Seychelles' beaches primarily originate from Indonesia, followed by India and Sri Lanka, a new study by the University of Oxford shows.

Called 'Sources of marine debris for Seychelles and other remote islands in the western Indian Ocean', the study is the first to produce a quantitative estimate of the sources of plastic debris washing up on these shores.

In a press release from the Seychelles Islands Foundation (SIF), the lead author of the research, Noam Vogt-Vincent outlined that the majority of plastic debris originating from the land was from distant countries, including Indonesia, India, and Sri Lanka.

"However, a staggering number of bottles found on Aldabra were from countries like China and Thailand, and no realistic current or wave patterns could account for the transport of this litter to Aldabra. It is, therefore, more likely that most of these bottles were illegally discarded from ships crossing the Indian Ocean, rather than directly from the mainland," he said.

The remote Aldabra atoll is one of the UNESCO World Heritage sites of Seychelles, an archipelago in the western Indian Ocean.

To investigate the source of the plastic debris, the University of Oxford carried out a global marine dispersal simulation that replicated the movement of plastic debris across the world's oceans.

The study forecast the buildup of plastic debris at 27 sites in Seychelles and the wider western Indian Ocean through the use of data on ocean currents, waves, and winds. Plastic debris entering the ocean from coastal populations, rivers, and fisheries was also taken into account.

In an online news report, Vogt-Vincent said: "We have combined observational data from across Seychelles with cutting-edge computer simulations to generate the most comprehensive predictions currently available for marine litter dispersal in the region."

He added that "this will provide vital information for local management on these islands – many of which are global biodiversity hotspots - and to inform national and international responses."

For marine ecosystems and the communities that depend on the ocean for food, tourism, and other economic activities, plastic pollution poses a serious threat.

The study also indicates that the rates at which this waste ended up on the beaches are linked to the monsoon seasons. Debris landed more frequently at the end of the northwest monsoon, peaking in March and April.

The co-author of the study, April Burt, said that "these islands are faced with the deeply inequitable situation of bearing the costs of removing waste they were not responsible for generating, contrary to the "polluter pays" principle."

"Our study has demonstrated that most of the plastic debris accumulating at these remote islands comes from far-off sources, and this should be the first positive step towards accountability and prevention," said Burt.