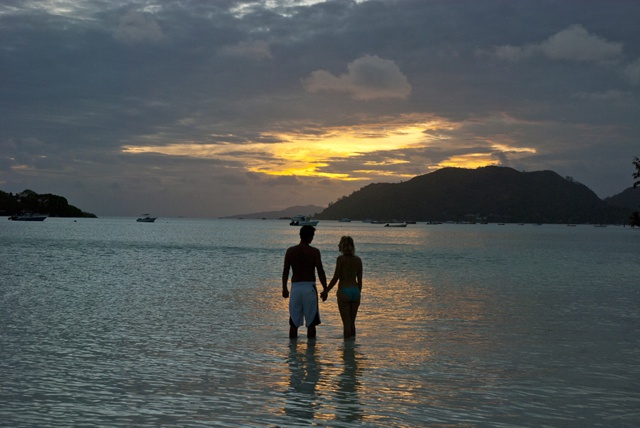 A couple enjoy the setting sun while on their beach holiday on the Seychelles second most populated island of Praslin. The Indian Ocean is considered as one of the top tourism destination in the world making this sector the pillar of the economy of many of the member states of IORA. (Gerard Larose, Seychelles Tourism Board)

(Seychelles News Agency) - Indian Ocean tourism ministers have agreed to work on better air and maritime connectivity in order to promote tourism in the region.

This was agreed at a two day meeting of the members of the Indian Ocean Rim Association which was held in Seychelles last week.

In a press conference on Friday at the Savoy Resort in the northern district of Beau Vallon on the main island of Mahe, seven ministers spanning from three continents and several islands, stated that this was a 'historical' debut for the forum which brings together 20 countries bordering the Indian Ocean such as Bangladesh, South Africa, Australia, Sri Lanka and Tanzania as well as island states of Mauritius, Madagascar, Comoros and Seychelles.

The Director of the Secretariat of the IORA, Mauritius-based Firdaus Dahlan stated that as tourism is one of the six pillars of the association, there is a need for enhanced cooperation between member states to develop that industry.

“We have to coordinate with all member countries and try to encourage of them to implement what we have achieved in this meeting and develop tourism cooperation,” said Dahlan at the press conference.

Each country present at the meeting has therefore decided to adopt an active approach to propel the tourism industry in the region to reach its potential.

In a press release, IORA said that “measures to make Indian Ocean tourism a more profitable and sustainable should be explored. Tourism should be conceptualized and structured in such a way that it contributes to the economic, as well as social development of populations of the Indian Ocean Rim.”

The member states present at the meeting discussed ways to improve air and maritime connectivity and also various forms of tourism products.

The Indian Ocean is considered as one of the top tourist destinations in the world region making this sector the pillar of the economy of many of the member states.

“…we talked about cruise ship tourism. This topic was high on the agenda and it is one aspect which we in Seychelles want to prioritize, to expand,” said the Seychelles minister for Tourism and Culture, Allain St Ange to the press.

The Seychelles foreign minister Jean-Paul Adam echoed the sentiment that the improvement of air and maritime connectivity is 'crucial to expanding the tourism sector.'

“In this era of global processes- the need for us to better coordinate transport policies and tourism policies could not be more important,” said Adam, in an opening statement at the meeting.

He noted that as of next month Air Seychelles, will open three new routes, to destinations in the IORA region; Mumbai, Dar Es Salaam and Antananrivo, "further strengthening the resilience of the sector".

“The Indian Ocean Rim has proposed that each member state has a committee that ties in the tourism board and civil aviation authority so that they can decide who goes after a new airline to come to the country. Our tourism and civil aviation delegations at the meeting could smile at this proposal as we started this working relationship two months ago to pave the way forward together for the benefit of the country,” said Seychelles minister for tourism, according to the Seychelles Nation newspaper.

The first meeting for tourism ministers of the IORA formerly known as the Indian Ocean Rim Initiative and Indian Ocean Rim Association for Regional Cooperation (IOR-ARC), comes 17 years after the regional forum was formerly launched in Mauritius.

‘The association had concentrated mostly on the political side of the organization. If there was instability in a member state, it worked to help resolve that, but now IORA is realizing the importance of tourism for our region,” said St. Ange at the end of the meeting.

Comprised of 2.3 billion people, IORA member states comprise about 30 percent of the world’s population has some of the world’s fastest-growing economies and plays host to 100,000 vessels passing through the Indian Ocean every year.

Trade between IORA’s member states was worth almost $1.3 trillion in 2013, and over the past five years regional trade between the member countries has grown at an average of 9.5 percent annually.

The next meeting of the IORA tourism ministers will take place during the South African tourism trade fair INDABA in South Africa, in May next year.