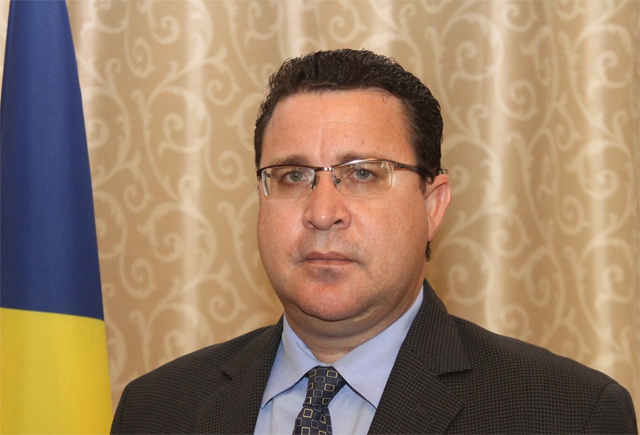 The official photograph of the Seychelles Minister of Finance, Trade and Investment Pierre Laporte, has been used to create a fake profile of the minister on Facebook (Seychelles News Agency)

(Seychelles News Agency) - Facebook’s popularity in Seychelles as a means of keeping in touch with friends and family both far and near also has its downsides. In recent years, many Facebook users from the 115-island archipelago, with its population of just 90,000, have fallen prey to online predators using a variety of scams and tricks to fool unwitting people into parting with their hard-earned money.

This week it emerged that a Facebook profile of someone claiming to be the Seychelles Minister of Finance, Trade and Investment, Pierre Laporte, had surfaced.

The profile, which bears an official photograph of the minister, has published an image bearing the logo of the Seychelles Commercial Bank and the World Bank, offering cash loans: “following your bad experiences in your loan applications with Dishonest people, I implemented a policy of financial (IMF) with two people, Michel Sapin, the Minister of Finance and Public Accounts in France, with Pierre Laporte of Seychelles, headquartered in France. We provide you with any serious person wanting to make the loan. the loan would be granted Short and long term (sic).”

Since many high-ranking government figures in Seychelles have long-standing official presences on social media to engage with their constituents, including Foreign Minister Jean Paul Adam, Designated Minister Vincent Meriton, Vice-President Danny Faure and even President James Michel himself, it would be understandable if any islanders allowed this imposter to pull the wool over their eyes.

‘People will know it’s not me’

In an interview with SNA, Laporte acknowledged that the fake account had been brought to his attention by concerned individuals, but that he had not yet taken action to report it with either Facebook or the authorities.

Laporte, who is one of the few cabinet ministers without an official Facebook presence, said if anyone had been scammed by the impostor to the extent that they had incurred material losses, they should report the matter to the police.

“If not, just ignore it,” he advised.

It is unclear if the imposter is part of an international fraud syndicate, as is often the case, or closer to home.

Laporte did not seem too worried about any damage to his reputation, saying “people who see this will know it is not me and I’m not involved in any of these kinds of activities.”

The problem is so widespread in the Seychelles that the Seychelles Police issued a press statement in October to warn the public about increasing reports of online scams.

Seychelles is 77th in the world when it comes to internet penetration, with just over 50 percent of the population having internet access, according to the Global Internet Report 2014.

The police called on the public to be “smart, very careful and avoid communicating or give any information or personal data to people they do not know”, especially for offers such as overseas job recruitments, lottery jackpots or the transfer and sharing of inherited fortunes.

The pundits offering loans and investment schemes are now becoming increasingly sophisticated. The United States Financial Industry Regulatory Authority (Finra) recently reported that high-yield investment scams often use social media – including YouTube, Twitter and Facebook – to “fabricate a ‘buzz’ and create the illusion of social consensus”, in order to lend an impression of legitimacy to their operations.

What to do if you spot an impostor

It’s easy to copy a person’s name and profile picture and set up a fake account, and unfortunately not always quite as easy to get the impostor’s account suspended by the social media platform in question.

Facebook's rules and regulations prohibit the users from opening accounts under pseudonyms or impersonating others, but it is up to other users to spot the fakes and report them.

Here’s how you can tackle various forms of impersonation on Facebook:

If someone is pretending to be you

Go to the impostor's Facebook timeline and click on the button with three dots at the bottom right-hand corner of the cover photo, then click on “Report” and then “Submit a Report” about the impostor.

If someone is pretending to be someone you know

You can use the same procedure above to report a bogus account pretending to be someone else.

You can report an impostor pretending to be you on Facebook even if you never opened an account or visited the site before. The “Report an Impostor Account” page will take you through the process, but you must be able to prove you are who you say you are with a scan or digital photo of a driver's license or other government-issued identification.

If this happens to you, Facebook can help you to reassert control, but again you will have to prove your legitimate right to the account in question by providing your username or real name, phone number or email address.