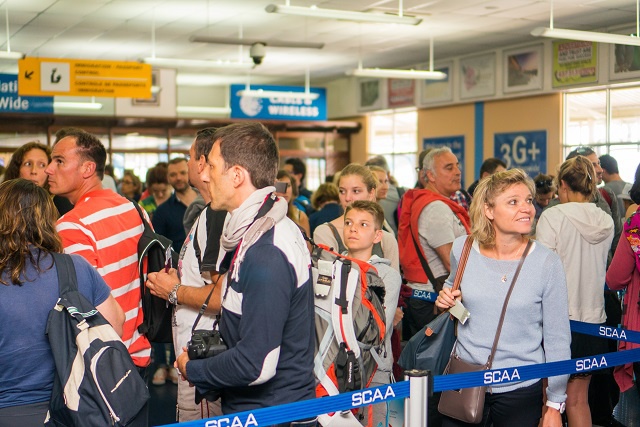 (Seychelles News Agency) - Seychelles will next year focus on beefing up its main tourism markets as well as the fastest emerging ones while sustaining others. STB’s Chief Executive Sherin Naiken said this at the close yesterday afternoon of the end of year tourism marketing strategy meeting.

The one day meeting held at the Savoy Resort at Beau Vallon, northern district of the Seychelles main island of Mahé was an opportunity for the managers of the tourism offices overseas to give an overview of the performance of their respective markets as well as highlight the challenges they are facing.

The Indian Ocean archipelago of 115 islands where the population of around 90, 000 people depend heavily on tourism which is also the main pillar of the economy started off on a high note reporting a 10.7 percent increase in tourism arrivals in 2013 compared to the previous year.

A challenging year for the tourism industry

A drop in tourism arrivals in the first half of the year where the number of tourists from Europe which is the islands’ main tourism market was 6 percent down compared to the corresponding period in 2013 raised some concerns.

France which has long been the main market for Seychelles has been overtaken by Germany. Nevertheless Europe remains the main market while China has seen a remarkable increase in the number of visitors that has travelled to the Indian Ocean island this year.

The Director of the STBS's Europe Office, Bernadette Willemin said there are many factors that influence the performance of each market and one of them is the availability of resources that helps to make Seychelles more visible as well as the end product and experience that visitors are presented with when they actually get to the destination.

“Europe has always remained the core market and even if arrivals from the continent is down by 4 percent our contribution to the total number of visitors stands at 65 percent,” she said.

Willemin is of the view that there is much that can be done locally to complement the efforts of the tourism offices overseas.

Strategies laid to consolidate the industry in 2015

STB’s Chief Executive described the meeting as rich and fruitful saying that the overseas representatives had put forward their opinions on matters that are of concern to them.

“Many of those areas are ones which we have already identified as challenges and have started to devise strategies to address, or even started implementing certain measures,” added Naiken.

Already the Seychelles Tourism Board (STB) launched a new official destination video, along with updated information brochures and a new website. This was at the 2014 World Travel Market in London earlier this month.

Those present at Thursday's meeting were presented with the new marketing materials designed to give the Seychelles Islands a brand new look which is aiming to bring potential visitors closer to the destination.

European markets and China to receive the most attention

As STB finalizes its strategies for next year, Naiken told the press that the main thrust will be to further consolidate Germany and the other main European markets of France, Italy, and Russia because they bring the bulk of visitors to Seychelles despite the drop observed this year and certain challenges which the board is addressing.

China is the main emerging market which STB will focus on and Naiken said that STB is fully supporting the proposal by CAISSA Touristic, a Chinese tourism enterprise to bring in chartered flights from China in 2015.

“We are now awaiting the decision of the Seychelles Civil Aviation Authority, SCAA. If everything is in order then this can start soonest, so we can be ready for those periods when the Chinese travel the most, such as during the spring festival.”

The Tourism Board’s Chief Executive identified the lack of Chinese representatives as a gap and said measures are already underway to have at least one in place on a full time basis.

“The provision of certain facilities which some of China's main tour operators asked for during the recent road show we attended there; is a work in progress. It will not all happen overnight, but gradually, as we are working to improve in all areas to provide better service to visitors.”

The meeting on Thursday also saw the participation of other partners in the tourism trade such as airlines as there was much emphasis placed on the necessity for improved air access which tour operators working to sell Seychelles have identified as a key constraint.

The Chief Executive of Air Seychelles Manoj Papa took the opportunity to talk about the new destinations that will be launched next week in a bid to increase the number of visitors to the Seychelles shores.

Air Seychelles will be launching flights to Madagascar, India and Tanzania and along with strategic partner Etihad Airways will also be increasing the number of weekly flights between Abu Dhabi and Mahé.

To date 207,203 visitors have disembarked in Seychelles, a figure which according to the National Bureau of Statistics remain at the same level as in 2013 which recorded 206,227 visitors.