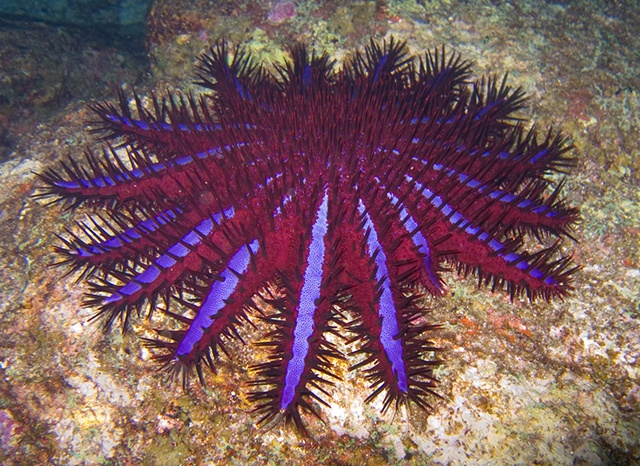 An unusually brightly-coloured thorn-of-crowns starfish found in Thailand. The venomous coral predator can swarm onto and completely decimate healthy coral reefs in a matter of days. (John Hanson/Wikimedia Commons)

(Seychelles News Agency) - Increasing levels of human development in Seychelles coupled with rising sea temperatures have caused an outbreak of venomous starfish that feed on delicate coral reefs, and unless concerted action is taken soon, a large number of reefs within the inner granitic islands of the archipelago could be entirely lost.

This is the view of an expert on the management of crown-of-thorns starfish (COTS), Dr Udo Engelhardt, who presented the most recent findings of his research at a presentation organised by the United Nations Development Programme (UNDP) in conjunction with the government of Seychelles and the Global Environment Facility (GEF) as part of their ‘Mainstreaming Biosecurity’ project last week Friday.

Two months ago, the outbreak of COTS in the north-western areas of Mahé was reported to be most prevalent in the Beau Vallon region in the northern part of the main island of Mahé, but according to recent survey work carried out by Engelhardt, the COTS are spreading further down the western coastline as they continue to spawn.

The starfish can be seen on reefs between five and 25 metres deep and are not commonly found in shallow waters.

The coral predator preys upon hard or strong coral polyps and is so named because of the venomous thorn-like spines that cover its upper surface.

One of the largest sea stars in the world, it occurs at tropical or subtropical latitudes from the Red Sea and the East African coastline across the Indian and Pacific Oceans.

In Seychelles, the starfish has been found as early as the 1960s, though in small numbers.

By mid-1997, a serious eradication programme was undertaken by MCSS in collaboration with volunteers and local dive centres and involved removing individual COTS manually.

The coral bleaching of 1998 that killed much of the coral around Mahé deprived the starfish of its primary food source, meaning the predators died off once more.

Dr Engelhardt visited Seychelles in December 1999, by which time COTS and most of the coral reefs were a thing of the past.

The starfish died off during the 1998-99 El Nino bleaching, which deprived them of the coral cover upon which they thrive. However, they began to re-emerge in 2001-2003 and have now bounced back in alarming numbers.

In April 2014, a coral reef survey by Dr Engelhardt found that numbers of COTS in the reefs were 20 to 30 times greater than sustainable levels. He also found that there were at least three generations of COTS present on the reefs, including a substantial number of juveniles in the under-reef strata – a good predictor of future outbreaks.

Although over a thousand COTS were removed during the emergency efforts this year, the surveys revealed that more and more swarms were appearing at increasingly frequent intervals.

According to a press statement issued by the office of the UNDP in Seychelles, emergency removals were recently performed with the help of Marine Conservation Society Seychelles (MCCS) and four diving companies to tackle swarms of COTS.

“More than 1000 individuals were removed during this time, but it was clear that more swarms were appearing at regular intervals (and sometimes disappearing again before they could be removed). A longer-term coordinated programme of activities is needed, and this is currently being negotiated between the Ministry of Environment and Energy (MEE) and the Indian Ocean Commission (COI), who may provide the required funding over a period of several years,” read the statement.

Link between COTS and tourism developments

During the presentation, Dr Engelhardt elaborated that increasing numbers of tourism developments can trigger high levels of phytoplankton in the ocean, an essential food source for the coral predators.

Activities such as bay dredging to create swimming and watersport areas for hotel patrons, destruction of natural mangrove wetlands and sewage or waste-water run-off can attract invading COTS, which go on to spawn in large numbers and destroy surrounding reefs.

Marshy wetlands act as essential filters, trapping substances such as phytoplankton and preventing them from ending up in the sea. Similarly, sediment heaped on either side of channels which have been dredged up is usually rich in phytoplankton.

The COTS expert has confirmed from his recent survey work that some inner island reefs have recovered from the El Nino coral bleaching event.

The fastest recovery, he said, has occurred around the protected marine national park of Cap Ternay, which has a resilient reef against stress because of its high biodiversity and says the pristine stretch of reef is considered “the jewel of reefs” in the granitic islands.

The main challenge will be the effective management of the predators before they spawn again, sending out tiny larvae to colonise new areas.

“COTS have a high reproductive rate, spawning about a million eggs at one time, which upon fertilization can travel between 10 and 100 kilometres,” warned Dr Engelhardt.

Dr Engelhardt is of the opinion that injecting the starfish with Sodium Bisulphate, made from the digestive bile of cows, is a quicker and more effective method of killing them than the potentially-hazardous process of physically removing them from the ocean one by one.

“This is (also) done one at a time, but is 50 times faster than manual removal,” he told SNA in an interview after the presentation.

Dr Engelhardt said that his most recent trip was mainly to provide training and capacity building. A team of 12 people have now been trained and it is hoped that injection equipment or “guns” will soon be acquired to render the emergency more efficient.

He said Seychelles is a smaller version of Australia's Great Barrier Reef, which is also suffering from a chronic COTS infestation.

“Hopefully, the Ministry of Environment and the marine parks will get together, along with the dive centres to control the COTS population before it is too late,” he said.