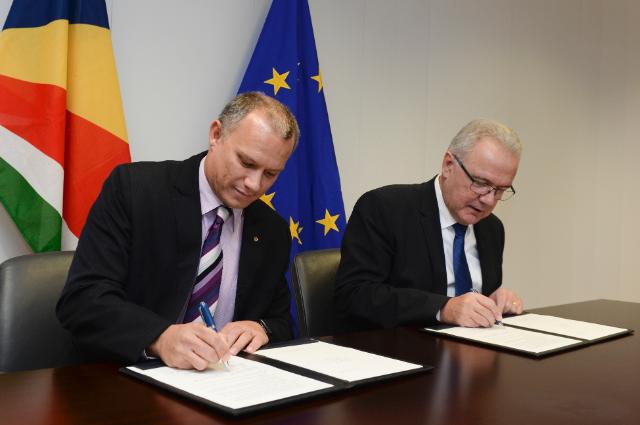 (Seychelles News Agency) - The Foreign Affairs Minister of Seychelles, Jean-Paul Adam, has signed two grant agreements with the executive body of the European Union totalling $6.4 million. The funds will be allocated towards sustainable development and climate change adaptation and mitigation programmes for the small Indian Ocean developing island state of just 90,000 inhabitants.

According to a press statement issued this morning by the Ministry of Foreign Affairs, Minister Adam held talks with both the Deputy Secretary General of the European External Action Service, Maciej Popowski, and Neven Mimica, the newly-appointed European Commissioner for International Cooperation and Development of the European Commission during his one-day working visit to Brussels yesterday.

One of the financing agreements signed was a grant for EUR 2.2 million ($2.7 million) for the Seychelles National Indicative Programme. The grant will be funded under the 11th European Development Fund and will focus on capacity building through specialised technical assistance for studies, evaluations and analytical work under the Seychelles Sustainable Development Stategy (SSDS).

The European Development Fund is the main instrument for European Union (EU) aid for development cooperation overseas, primarily in Africa, the Caribbean, and Pacific countries. Funding is provided by voluntary donations by EU member states and currently stands at EUR 31.5 billion ($39 billion).

The second grant of EUR 3 million (S3.7 million) was allocated to Seychelles under the Global Climate Change Support Programme of the EU. The funds will be utilised for the implementation of the Seychelles’ national Climate Change Strategy (SSCS) by strengthening policy framework and supporting adaption to climate change measures in coastal areas.

Minister Adam took the opportunity during the signing ceremonies to discuss issues pertaining to development and security.

Speaking to Commissioner Neven Mimica, the Foreign Affairs Minister lauded the EU’s commitment to assisting developing states attain the 2015 Millennium Development Goals (MDGs), and mentioned the current focus on the ongoing negotiations on the Post-2015 United Nations MDGs, particularly in relation to climate change concerns and developing the concept of the Blue Economy.

“Within the Post-2015 agenda, we must also consider the unique challenges and specificities of the Small Island Developing States (SIDS). Seychelles will continue to emphasise on the need to develop the vulnerability index for SIDS,” said Minister Adam.

During his meeting with Assistant Secretary-General Popowski, the minister focused on the importance of maritime security, particularly in piracy hotspots surrounding the Horn of Africa and the adjacent area of Indian Ocean.

Minister Adam also pointed out the importance of information-sharing as a critical deterrent of international maritime criminal activities, such as piracy and drug trafficking. Seychelles has been supported by regional and international bodies including the EU Naval Force (EUNAVFOR) in enhancing maritime security through the Regional Fusion and Law Enforcement Center Safety and Security at Sea (REFLECS 3) organisation.

“It is through the continued support of the EU that we, the East African region, have been able to fight the menace of piracy activities,” said Minister Adam. “However, the threats of piracy remain and REFLECS 3 will continue its work in providing the maritime security and law enforcement communities with a regional focal point for reporting, analysing and coordinating investigations within the South West of the Indian Ocean.”

In this vein, Minister Adam added that the Seychelles was looking forward to hosting an AU–EU conference on maritime security next year.

Aquaculture industry, delayed by COVID, to come online in Seychelles later this year