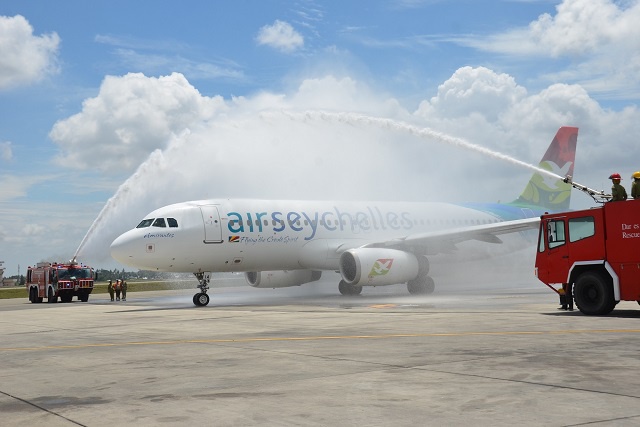 The two-and-three-quarter hour flight that left Seychelles at around 9.45 am on Tuesday was welcomed in the main port and commercial centre of Tanzania with a traditional water canon salute at the Julius Nyerere International Airport and traditional dance performances by a Tanzanian cultural troupe.

In December last year, Seychelles and Tanzania signed the bilateral air services agreement that has led to the Indian Ocean archipelago’s national airline introducing direct flights between the two countries.

The lack of air connectivity between African countries remains an issue, and enormous potential still exists for cultural exchanges, tourism and trade in the east African and western Indian Ocean region. This was addressed by member states of the Indian Ocean Rim Association including Seychelles and Tanzania, during a meeting held in the Indian Ocean archipelago at the end of November, and the launching of direct flights between the two countries has been seen as a much-needed step forward.

Tanzania’s Deputy Minister for Transport Charles Tizeba who was on the inaugural flight from Seychelles yesterday morning described the event as another milestone as part of his country’s endeavours to increase easier access to different destinations.

“Connectivity means easy trading relationships, enhanced tourism - both cultural and conventional tourism - and as such, as Tanzanians we are looking forward to see improved trade relationships and exchanging of commodities between our two sister countries,” Tizeba told guests at the ceremony held at the Julius Nyerere airport.

Some of the popular tourist destination in Tanzania include the magnificently round crater of the Ngorongoro conservation area; Mount Kilimanjaro, the highest free-standing mountain in the world; the Serengeti national park; the Selous game reserve, the largest in Africa; and Zanzibar, home to Stone Town, a UNESCO World Heritage Site.

According to the Tanzanian Deputy Minister for Natural Resources and Tourism, Mahmood Hassan Mgimwa, the eastern African nation receives some 1.5 billion visitors per year.

“Seychelles depends on tourism and fisheries, (in) Tanzania we depend on so many things: we have got so many industries, we have got tourism, fisheries, agriculture. This is an advantage... Our people in Tanzania can do business with people in Seychelles,” said Mgimwa.

Tanzanian and Seychelles officials alike have dismissed the question of competing for tourists and are looking for ways to cooperate in tourism to make the connection between Seychelles and Dar es Salaam viable and beneficial for both countries' tourism industries. They are engaging tourism operators in both countries to market the two countries as the ideal beach-safari package.

Destination management companies (DMCs) in Seychelles are also already establishing contacts in Tanzania to look for ways to market the two destinations to their clients, both for Seychellois nationals as well as foreign visitors, and many Seychellois DMCs are excited about the possibilities ahead.

“We are marketing it as a two-centre destination, we have already spoken to some tour operators during the different trade fairs that we have been to in recent months to market a safari in Tanzania and beach holiday in Seychelles. We have Kenya, but here we have attractions like Kilimanjaro and others that Europeans can visit and then come to Seychelles as the flight is only some two hours which is very short and convenient,” the head of marketing at Creole Travel Services, Eric Renard, told SNA.

The Seychelles Tourism Board has also welcomed the connection as a step forward to link two destinations that complement each other.

“It’s something that work both ways. We should not only expect tourists to come to us, we need to create the awareness among the people in Seychelles that in Tanzania there are many attractions," STB’s director of marketing, Rose-Marie Hoareau told SNA.

"Next week, STB will be taking part in trade workshops to meet with travel agents and tour operators in Tanzania to show them what Seychelles has to offer. The two countries are so different, so it’s not a competition but instead they complement each other."

Addressing guests as well as local and international press, Air Seychelles' General Manager for Corporate Affairs, Alan Renaud, said that over the last three years the airline had worked hard to reshape its business and was now in an exciting growth phase, adding that Dar es Salaam was the start of an exciting new chapter for the national airline.

“Connecting Seychelles and Dar es Salaam we are connecting two iconic tourism destinations," he said. "We have two UNESCO World Heritage Sites here in Tanzania, and you have many more. We know we can be profitable here."

"This is about partnerships, this is about Africa working together to make an exceptional product that we can only do together,” added Renaud.

While tourism and trade are being targeted, the onward connections that the flight from Dar es Salaam will offer to other regional destinations, including Air Seychelles' newly-launched flights to Mumbai, are seen as the means that will sustain the new destination.

“At the moment, Eastern and Southern Africa have a huge Indian diaspora," explained Renaud. "In Johannesburg we have over 1.3 million people of Indian descent and in Tanzania its over 80 thousand. We have our flights to Mumbai three times a week and there we believe that the connections between Mumbai-Johannesburg and Mumbai-Dar es Salaam is what is going to make this flight sustainable."

The Seychelles to Dar es Salaam route twice weekly on Tuesdays and Sundays is serviced by the national airline's new Airbus A320, which Air Seychelles has leased from Etihad Airways, with a 120-seat capacity in economy class in a three-by-three seat configuration as well as 16 seats in business class in a two-by-two layout.

The aircraft will also offer 7.2 tonnes of weekly bellyhold capacity to and from Dar Es Salaam, an opportunity to increase trade between the two nations.

The Seychelles Honorary Consul in Tanzania Maryvonne Pool, who has lived in the eastern African nation for 31 years, says many entrepreneurs in Tanzania have shown interest in exporting various products, such as fresh seafood, to Seychelles.

Established in 1977, Air Seychelles adopted its present name in September 1978. Between 1978 and 2012 it was wholly owned by the Seychelles government but in 2012 the UAE's Etihad Airways bought a 40% share in the airline, investing $45 million in the airline.

In April this year, the company announced its second successive year of net profit, raking in a total of $3 million, almost three times more than the $1.1 million net profit recorded in 2012.

Co-editor of the Seychelles News Agency Sharon Uranie was on the inaugural flight HM 777 to Dar es Salaam on Tuesday.