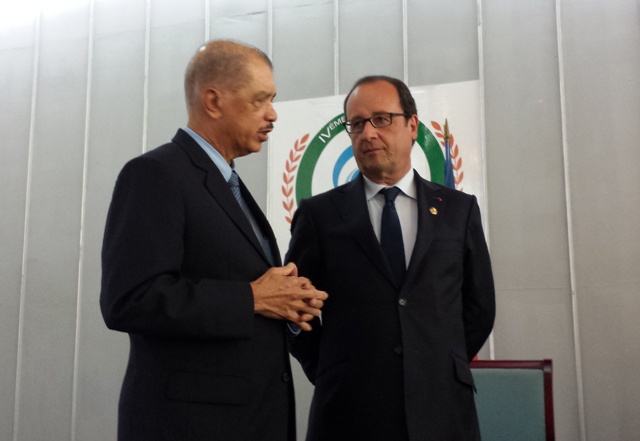 (Seychelles News Agency) - Enticing French investors and businesses to invest in Seychelles, that will be the aim when the Seychelles President James Michel meets with representatives of the French Business Confederation (Mouvement des Entreprises de France) in Paris.

According to a press statement issued by State House this afternoon, Michel arrived in Paris last night. The visit is at the invitation of his French counterpart Francois Hollande.

“The highlight of the visit will be a one to one meeting with President Francois Hollande at the Élysée Palace which will be followed by bilateral discussions between the delegations of the two countries,” reads the statement.

Seychelles and France have good relations and strong historical ties due to the presence of the first French settlers in the Indian Ocean archipelago back in 1770.

France has long been the main tourism market for Seychelles and continues to be the source of a large number of tourists despite a drop this year. According to latest statistics available on the National Bureau of Statistics website French visitors to Seychelles so far (29,759) has reduced by 10 percent this year when compared to the same period last year.

France is also a main source of imports for the Indian Ocean archipelago of 115 island with a population of around 90, 000 that relies heavily on food imports, with up to 90% of goods consumed coming by air and sea cargo.

Whilst in Paris, the Seychellois Head of State is also expected to meet with the Director General of the French Agency for Development (Agence française de développement), a representative of the Paris Club as well as with Seychelles Honorary consuls in France.

Michel’s last official visit to Paris was in October 2007.