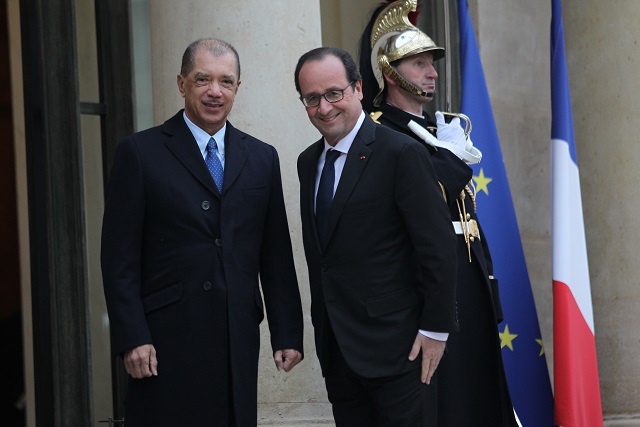 (Seychelles News Agency) - The Paris negotiations on climate change in December next year and the resolve of both Seychelles and France to see the adoption of a legally binding agreement at the meeting was amongst the main topics discussed when the Seychelles President James Michel met with his French counterpart Francois Hollande in Paris on Wednesday.

This comes four months after their meeting at the Summit of Heads of State and Government of the Indian Ocean Commission (IOC), held the Comoros.

In a press statement issued this morning State House says Michel and Hollande engaged in one on one discussions before joining their respective delegations for bilateral meetings.

Michel highlighted the close relations that exists between the two countries and expressed his gratitude to France for its continuous support.

He noted that his official visit to France was also an opportunity for the two countries to exchange their views on the priorities of the COP 21, the 21st session of the Conference of the Parties to the United Nations Framework Convention on Climate Change (UNFCCC) which will be held in Paris in December 2015.

"We share France’s resolve to see the adoption of a legally binding agreement at the Paris Conference in December 2015. We are calling on all partners to ensure that the Lima Conference leads to the conclusion of an agreement at the December conference. As a small island developing state in the Indian Ocean, Seychelles is willing to work with France and other island states, to help overcome the barriers that still exist to finalize such an agreement," said Michel.

For Hollande, the visit by the Seychellois Head of state marked the renewal of close cooperation between two countries that share several common objectives.

He proposed that France and Seychelles should work together to develop the blue economy concept as well as for the sustainable exploitation of oceanic resources.

The French president has expressed the desire to help Seychelles promote and further develop the blue economy adding that France will provide the needed expertise to that effect.

According to the State House statement Seychelles has also sought France’s support to promote the vulnerability index as an effective tool for measuring SIDS development.

Debt-swap for adaptation as a means to help Seychelles build resilience faced with climate change was also amongst issues discussed during the bilateral meeting.

Maritime security was another point of discussion where Michel expressed gratitude towards France’s efforts to help Seychelles and the Indian Ocean to deal with the scourge of piracy and instability in Somalia.

Hollande praised Seychelles' leading role in combatting maritime piracy and noted that the efforts of the international community in supporting countries in the region had led to a considerable decrease in piracy attacks off the Somali coast and in the Indian Ocean.

He also welcomed regional cooperation between Seychelles and the French overseas departments of Reunion and Mayotte in the Indian Ocean.