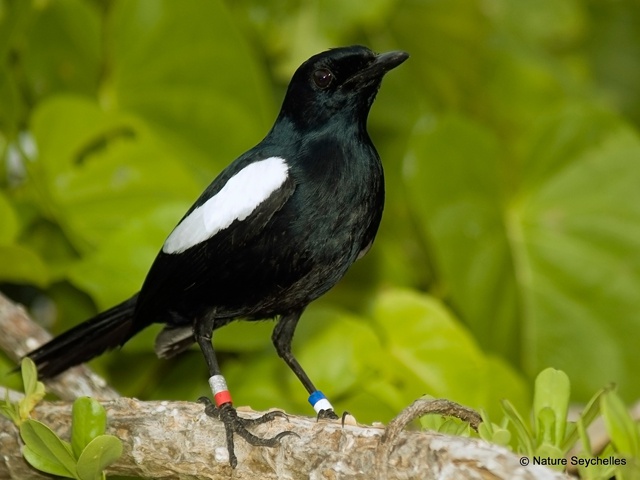 The endemic Seychelles magpie robin, rescued from the brink of extinction from 12 birds to 280 at present, are now facing a mysterious eye disease that is affecting their ability to survive to adulthood on the island of Aride (Nature Seychelles)

(Seychelles News Agency) - A British veterinary charity organisation, Wildlife Vets International (WVI) has launched a fundraising drive through the UK’s Big Give Christmas Challenge to help a selection of critically-endangered birds and animals in Seychelles and Mauritius from extinction.

WVI is assisting island conservation groups such as Nature Seychelles, headquartered in Roche Caiman on the main Seychelles archipelago’s main island of Mahé, with veterinary aid and training to safeguard endangered birds such as the Seychelles paradise flycatcher, olive white eye and magpie robin.

According to a press statement issued by Nature Seychelles, the co-founder and director of WVI, Andrew Greenwood, visited the Indian Ocean islands in November to prepare for the fundraising campaign.

One for sorrow, two for joy

On the special nature and marine reserve of Cousin Island managed by the local NGO, Greenwood observed a healthy population of magpie robins, successfully brought back from the brink of extinction.

From just 12 birds on Cousin, Nature Seychelles and partners Birdlife International have helped the cheerful black-and-white birds reach a population of around 280 on five islands in the western Indian Ocean archipelago, a rare success story in the conservation of endangered species.

However, on the neighbouring island of Aride, a mystery is afoot – juvenile magpie robins are not surviving to adulthood, affected by an unknown eye disease.

The ailing birds need urgent access to specialist avian vet advice and pathology to identify the blight or be wiped out completely on the island, a setback the passionate conservationists are not prepared to face.

The chief executive of Nature Seychelles, Dr Nirmal Shah, warned that decades of work that has gone into restoring populations of the magpie robin as well as the endemic olive white-eye, Scops owl and paradise flycatcher could so easily be undone.

"We have achieved conservation miracles, but there is always the danger of slipping back and without wildlife veterinary expertise on these islands we could be facing disaster,” he said.

Greenwood also met the chairperson of the Marine Conservation Society Seychelles, David Rowat, which in partnership with the Banyan Tree Hotel Resort in the south of Mahé, has launched the country's first turtle and terrapin rehabilitation centre.

Dr Rowat highlighted the urgent need for specialist wildlife veterinary expertise to help nurse the centre’s patients back to health. A mysterious burrowing barnacle that affects turtles in the Seychelles is a prime example of why this is necessary, as the infected turtles’ shells become damaged and porous, causing them to lose buoyancy in the water.

Never to go the way of the dodo

A little way across the pond, WVI is planning to help similarly threatened birds in Mauritius by helping to establish new populations of the endemic echo parakeet, pink pigeon and Mauritius kestrel.

Mauritius is home to one of the most well-known cases of extinction, that of the dodo, which died out in the 1600s due to human consumption and the introduction of cats, dogs and other mammals which accompanied the human settlement of the island.

Less widely-known extinctions suffered by Mauritius include the island’s double-billed parrot, the Mauritius blue pigeon and the giant skink.

WVI and the Mauritian Wildlife Foundation (MWF) has plans to create new populations of the distinctive echo parakeet, pink pigeon and Mauritius kestrel in order to prevent future extinctions, and all of these birds require disease screening to ensure that healthy birds are selected to populate new areas.

At its worst, the parakeets were down to only five known breeding pairs, the pink pigeons were down to just a handful and the serene Mauritius kestrel numbered only four birds. MWF and the Mauritian government have toiled for many years to restore all three species to several hundred individuals each.

The introduction of Aldabra giant tortoises, originally from the Seychelles, following extinction of their counterpart in Mauritius, provides natural grazing pressure and seed dispersal for restored island habitats.

The once-threatened Telfair’s Skink is now also thriving thanks to a captive breeding and release project.

Despite the gains, MWF’s Conservation Director, Vikash Tatayah, is also concerned about the lack of access to specialist wildlife vets.

"We have had some major successes but as recently as 1975 Mauritius lost yet another species, the burrowing boa of Round Island,” he said.

"To be able to save these creatures we have needed the best veterinary advice we could get on both disease and population management. We need to see this collaboration continued as we shall need to support these creatures for many years to come, if not forever."

Determined to help save what is left of such vitally important biodiversity, Dr Greenwood believes WVI can play a vital role in training and providing veterinary pathology services to local NGOs .

He said: "None of these creatures is found anywhere else. They are simply unique, and most of these threatened species have been reduced to a single population on one island, rendering them extremely vulnerable to extinction from disease.

"That's why establishing new populations is so important. To do that successfully, disease screening is needed to ensure healthy new populations, together with health monitoring and access to expert pathology to identify causes of death.”