"We support concrete projects, we want to see what we are funding" Diplomatic spouses raise funds to help the Seychelles community 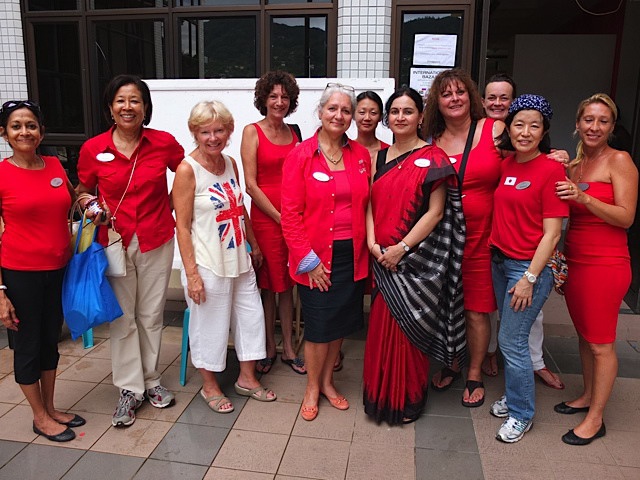 Group photo of the ladies that make up the Diplomatic Spouses Association of Seychelles. (Séverine Martin, Seychelles News Agency)

(Seychelles News Agency) - With Christmas and New Year celebrations just around the corner people around the world are busy preparing as well as starting to be on the lookout for the perfect gift for loved ones.

Seychelles, an archipelago of 115 islands in the Indian Ocean with a population of around 90, 000 people is no exception as most of the shops in the capital of Victoria are packed, many offering discounted prices.

The Diplomatic Spouses Association (DSA) is one such groups that organized its annual fundraiser on Saturday December, 6 at the National Library in Victoria. This was the DSA’s fifth annual fair.

The one day event which takes the form of an International Bazaar aims every year to raise funds to support local charity projects and institutions.

SNA caught up with the current Chairperson of the Diplomatic Spouses Association in Seychelles, Alla Belous, the spouse of the Russian ambassador in Seychelles, to get her perspective on the association's role and involvement in the community.

SNA: Firstly tell us a little bit about the Diplomatic Spouses Association of Seychelles, when was it formed and who are the members?

Members of such associations in other countries are exclusively wives of members of the diplomatic corps. In Seychelles, due to the limited number of diplomatic expatriates, local ladies are also invited.

SNA: What is the objective of organizing the international Bazaar each year?

AB: The aim of the DSA is to operate as a complete voluntary, non-profit organization in promoting international friendship and strengthening relations with Seychelles.

Funds are raised with the help of local organizations and individuals who participate, whether by selling their products or donating items for the raffle every year during the International Bazaar.

SNA: What was the outcome of this year’s event?

SNA: What did people love the most this year?

AB: As usual, we organized our DSA’s raffle. The luckiest winners won free air tickets to Abu-Dhabi or Colombo, stays in the local 5-stars hotels, dinners in the best restaurants on Mahé (Seychelles main island), expensive jewelry, computers or smartphones and many other valuables prizes.

The International Bazaar itself gave the chance to all visitors to buy souvenirs like the well-known Matriochkas (also known as Russian nesting doll), original Christmas gifts and items of traditional art as well as tasting food and drinks from different countries.

People were able to taste a bit of all the countries represented: vodka from Russia, Pimm’s from Great Britain, biryani from India, tea from Sri Lanka, Japanese sushis, French crêpes and many more!

This year, people had also a great deal with second-hand bicycles which were donated by St Anne Island Resort.

All items, goods, and food are donated by the embassies, the private sector, hotels, restaurants or individuals. Private companies can also sponsor the event and make donations used to finance charity projects.

SNA: What kind of projects does the DSA support and how are they selected?

AB: Our main focus is the pediatric section of the Ministry of Health, orphanages, old people’s homes and schools. Above all, we support concrete projects. We want to see what we are funding.

Every year our committee decides the projects we are able to support during our general meeting held usually in January. What is really important to us is to be fair. That’s why we are doing our best every year to help different projects.

In 2014, we launched several projects; for instance we donated books and books shelves to the Baie Lazare Public Library. Among other projects, we also funded beds for the Ministry of Health’s Central Hospital which are ready to be delivered.

SNA: In the coming years, will the DSA support other matters like environment or health’s projects?

AB:As I said, we are involved in what we are doing and supporting. We need to be sure that the funds we are collecting are well used. But, if we have enough people to handle other projects, we will be glad to help Seychelles in the fight against HIV/AIDS.