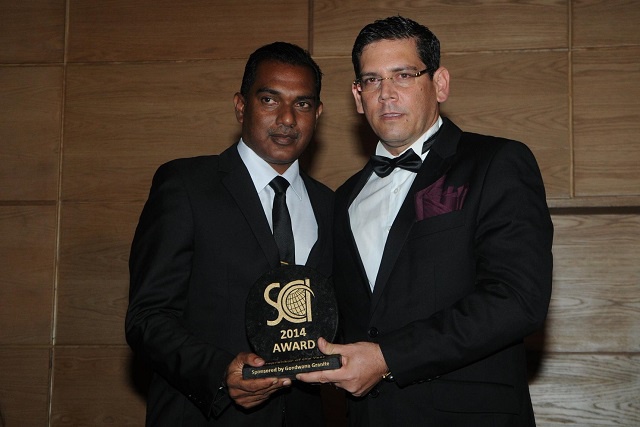 (Seychelles News Agency) - Funeral services provider Andrew Padayachy was honoured last weekend as this year’s top entrepreneur in the Seychelles islands by the members of the Seychelles Chamber of Commerce and Industry (SCCI) at the Seychelles Business Awards 2014.

The local business community came out in full force this year to enjoy the annual glitz and glamour of the SCCI’s annual Business Ball 2014, held this Saturday at the recently-opened Eden Bleu Conference Centre of Eden Island, just off the east coast of the main island of Mahé.

The attendees did not allow the ticket price of SCR 2,000 ($140) to prevent all 250 highly sought-after seats from being sold out. And it seems the ticket prices were paid gladly, as all profits from the evening were donated to the North East Point home for the elderly located in the Anse Etoile district in the northern part of the main Seychelles island of Mahe.

Before the ceremony began, men in tailored suits and women in glamorous ball gowns posed on the red carpet to the accompaniment of clicking camera shutters and jazz music, and with over a hundred businesses and individuals nominated for ten awards, the competition was not restricted to the styles on the red carpet.

It was this against this backdrop that SCCI Chairman Marco Francis went on to announce the winners of the ten categories, surprising Padayachy when his name was read out for the most coveted prize of all.

“I am shocked but at the same time I realised that I deserve it. We have in a couple of years developed from my mother’s owned small family business to what we are today. The public in general know of the good service we give and we do it with our hearts,” he told local media.

A former Air Seychelles employee and taxi driver, Padayachy, has built up an impressive business empire including a video rental business and his funeral service, which now boasts the archipelago’s first and only crematorium.

The 45-year-old got started in the funeral business making coffins in a small shed. He is now the owner of funeral parlours in Victoria, Plaisance, Anse Royale and Mont Fleuri and employs a workforce of 22 people.

The other awards included the Lifetime Achievement Award, which went to Hunt Deltel’s Mike King Harman. The entrepreneur, who is now in his sixties, ventured into the ship chandelling business when he was just a teenager and has since made his company one of the largest and well-known names in Seychelles.

The best Tourism Establishment Award went to restaurant La Plaine Saint André, once a colonial plantation house, which was converted into a rum distillery and restaurant. The award for Environmental Sustainability went to Nature Seychelles, a locally-managed environmental NGO.

The jewellery retain chain, Jouel, won the Best Premium Services Award, while the Best Artisan for 2014 went to Maria and John Sullivan of the Exotic Scents company which specializes in locally-manufactured soaps and beauty products, enhanced with the natural fragrances of the islands.

Seychelles Breweries Limited, the country’s sole brewery, managed to walk away with the Best Manufacturing Award despite production interruptions suffered this year from upgrading its production line machinery and other unexpected incidents.

Iles des Palmes, a Praslin-based hotel, won the best Product Innovation Award, while the Mauritius Commercial Bank (MCB) held on to the award they won in 2013 as the Best Banking and Financial Institution.

The Rotary Club Coco-de-Mer was also honoured as the recipient of the Best Social Corporate Responsibility Award.

In his opening ceremony speech, the chairman of the SCCI, Marco Francis, suggested the organisation’s members develop a ‘charity begins at home’ attitude, calling for business owners to consider the possibility of setting up a revolving fund to help smaller businesses.

“There is space in our economy for different sized commercial activities. Let us give each other room to grow and let us not seek to put each other down,” he said.

Francis recapped the successes and high points of 2014 and outlined the SCCI’s plans for next year which include the laying of the foundation stone of a new Chamber house, the hosting of an international trade and commerce expo in May as well as the setting up of a Business Arbitration Centre, for which the SCCI has applied for funding from the European Union.

“Such a centre, which exists everywhere in the world, will be a first in Seychelles and it will transform the way we settle commercial disputes among ourselves,” said Francis.

“The past twelve months have been tough for all of us and even as the year ends, we are still facing certain uncertainties,” he added. “However, that has not stopped us from pushing ahead, forging new paths and defining visions which are at the same time profitable and sustainable in the long term; not just for the private sector, but equally for this beautiful land we call home.”

The Seychelles Minister of Health, Mitcy Larue, who addressed the guests on behalf of the government thanked the SCCI and businesses for their support throughout the year and also paid homage to the work achieved by the SCCI.

“The SCCI is pivotal in bringing about an active dialogue between the businesses and government on issues which will benefit the trade itself and the economy and government of our country,” she said.

Larue also placed special emphasis on the charitable donation to the old people’s home and encouraged more private-public sector partnerships in the future.

“I would like to thank you all for having showing compassion to the residents of the Old People’s Home at North East Point through the donation of the profit of the proceeds of this event,” said Larue who also thanked local wine import and wholesale business, East Indies, which made a separate donation to the home.

Saturday's Business Award ceremony was the second to be organised by the SCCI after the first one in 2013.