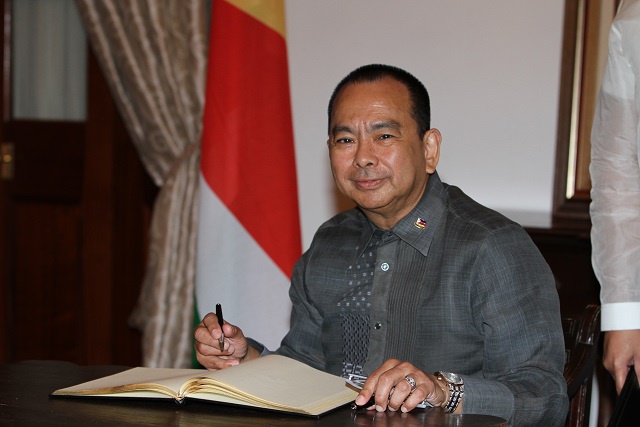 (Seychelles News Agency) - Tourism including medical tourism, fisheries, the blue economy concept and climate change are some of the areas of cooperation which the newly accredited ambassador of Philippines to Seychelles Bayani  V. Mangibin says can be further developed between the two countries.

Mangibin said this in an interview with the local press at State House this morning after he had presented his credentials to the Seychelles President James Michel.

He told journalists that these are some of the sectors of mutual interest to the two countries which was largely discussed during his meeting Michel which he said was also an opportunity to follow up on cooperation that was already discussed at the first Seychelles-Philippines joint committee meeting.

This was held in the Indian Ocean archipelago’s capital of Victoria in October last year.

“This is our agenda for strategic partnership and because the similarity of our geography, we have a very close interest in tourism and fisheries…… We are also looking at ways on how to promote our industrial cooperation between small and medium enterprises, because that’s one area in the Philippines that has helped us in our development…….so we would like to share our experiences in such a way that both of us can really develop a greener economy,” said Mangibin.

On the issue of climate change the newly accredited ambassador said his discussions with Michel centred on how the two countries can cooperate to “alleviate the adverse effects of the negative development of climate change.”

In a press statement issued this afternoon, State House said Michel also took the opportunity to extend his sympathy to the government and people of Philippines following the destruction caused by the recent natural disaster that affected the country.

Typhoon Hagupit that hit the asian nation over the weekend was accompanied by strong winds and heavy rains. According to AFP tens of thousands of people especially those living close to the coast have been affected and at least 27 people have been confirmed dead so far.

The Seychelles president has expressed hope that “those affected would be able to recover and rebuild their lives.”

Bayani  V. Mangibin who is the sixth ambassador of Philippines to be accredited to Seychelles is based in Nairobi, Kenya.