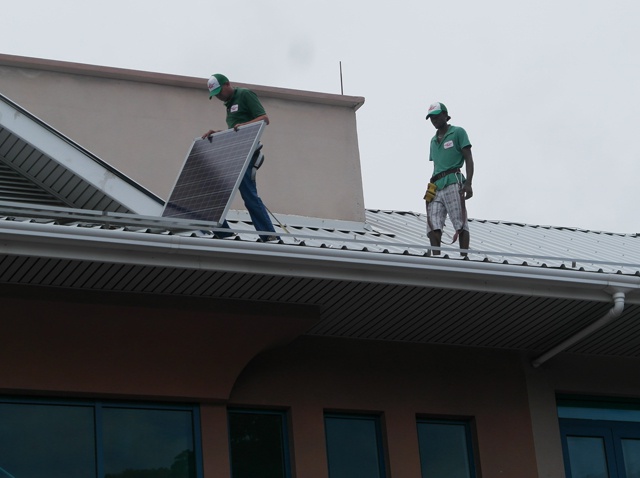 (Seychelles News Agency) - After the recent launch of a rebate scheme that would help businesses purchase and install photovoltaic systems to harvest solar energy which would then be fed back into the national power grid in Seychelles, SNA decided to investigate the scheme in more detail.

The Indian Ocean archipelago of 115 islands with a population of around 90,000 people is almost completely dependent on fossil fuels, which power large generators around the main inhabited islands of Mahé, Praslin and La Digue.

The Seychelles currently has a wind farm of eight turbines, donated by UAE-based energy company Masdar, which each generate about 750kW. In total, this is equivalent to around 2.2 percent of Seychelles’ current electricity requirements, providing power to around 2,000 homes.

The government aims to generate 15 percent of its energy requirements from renewable sources by 2030.

SNA spoke to Dominic Rassool, the Project Manager of the Programme Coordination Unit (PCU) of the partnership between the government of Seychelles, the United Nations Development Programme (UNDP) and the Global Environment Facility (GEF), a sustainable development collaboration which is jointly funding and running the rebate scheme to help the Seychelles adopt greener renewable energy technologies and rid itself of its dependence on fossil fuels.

SNA: Can you explain a little more about the PV rebate scheme for the commercial sector recently launched? Is it for all types and sizes of businesses in Seychelles?

The commercial rebate scheme is a limited pool of funds from which any registered business can be rebated a proportion of an investment made in grid-tied PV technology. The maximum amount that can be given out to any single investment is 86,400 Seychelles rupees (around $6,190). Its nature is such that it lends itself well to SMEs, because these will likely require smaller systems, thus making the rebate amount a relatively more significant proportion of the capital expenditure. This setup ensures that PV is affordable and makes economic sense to small businesses, thereby ensuring they have an option to increase their profitability.

SNA: Is there a limit on the KWp of the system installed in order to qualify for the rebate?

SNA: How much has been put together in terms of funding from the government of Seychelles and the GEF for the rebate scheme in total?

The scheme is supported by a $1.4 million fund, with 50% GEF contribution and 50% government of Seychelles contribution. This fund is also contributing towards the domestic rebate scheme. We have capped both schemes (domestic and commercial) to $100,000 each. Before a scheme's funds are exhausted, a review of its performance is made, and a decision is taken as to whether changes are needed. In fact, we have based these schemes on financial models, which attempt to anticipate their performance - if the scheme underperforms, alterations are made.

The important thing to note is that the $1.4 million is a national investment. It is, therefore, essential that we consider its overall performance. The target is to achieve 1.3 MWp of installed capacity with these funds - if scaled up, the commercial rebate scheme will allow us to easily surpass this target. However, we are also committed to ensuring that families have access to PV, so driving growth in the domestic use of PV is also important.

SNA: Let’s say I own a business and I would like to benefit from the scheme – can you take us through the process step by step from beginning to end?

In parallel, fill in an application form for a rebate; installers have access to forms, or you can obtain same at SEC (Seychelles Energy Commission).

Once the system is installed, a site visit is conducted by PUC. Upon confirmation of your system's commissioning, you are contacted to collect your form and submit this to DBS (Development Bank of Seychelles) for a rebate.

SNA: Will businesses be able to sell back surplus power into PUC’s grid? At what rate?

Currently PUC offers what we call a net metering tariff. Energy produced is offset against energy consumed. The difference is what is left for your monthly bill. Producing surplus power is not recommended, and so a rate that reflects the marginal cost of production of electricity is applied. The value of this rate varies, but sits at approximately 2.88 Seychelles rupees ($ 0.20) per kWh.

SNA: Are the benefits guaranteed to outweigh the cost of the repayments of financing the system and the installation costs?

In principle, yes. Businesses are generally expected to have a payback period of less than 4 years.

SNA: How much choice do Seychellois have in terms of companies qualified to install these systems?

There are a handful of companies providing such services. The SEC has the full list of companies and their contact details.

SNA: You launched the PV rebate scheme earlier this year for the residential sector – what was the response like?

We now have over 25 installations in the country, and feedback has generally been very positive.

SNA: Given the rebate offered now, can every homeowner afford to have a PV system installed?

Not necessarily. The rebate reduces the payback period, which itself is defined by a series of positive cash flows that eventually offset the capital expenditure. These cash flows are entirely made up of avoided costs. If avoided costs are relatively low, then said cash flows will need more time to offset the capex. Moreover, financing may require that these cash flows also offset additional costs (interest). The avoided cost is defined by the rate a user pays for electricity. The first few 100 units consumed are relatively cheap, and will not offer high avoided costs; units consumed in the higher blocks are expensive, and these will offer high avoided costs. Even with financing costs, sizing a system to offset these ‘expensive’ units will give sufficient positive cash flows to pay back for the system within 5 years.

SNA: What is the target you wish to have achieved (both residential and commercial) by the end of this project and are you on track so far?

We are aiming for 1.3 MWp. In one year we have reached 0.8 MWp, so we are very pleased with the performance thus far. Having said this, we have to ensure that the market continues to grow after the project's end.

SNA: To end off, what would you say to convince business owners and residents alike to adopt this form of renewable energy?

In a nutshell? It makes economic sense for homes and businesses, it provides jobs, it is clean, it helps the country become more energy independent, and it saves the economy foreign exchange.