Seychelles accepted as a member of the World Trade Organisation 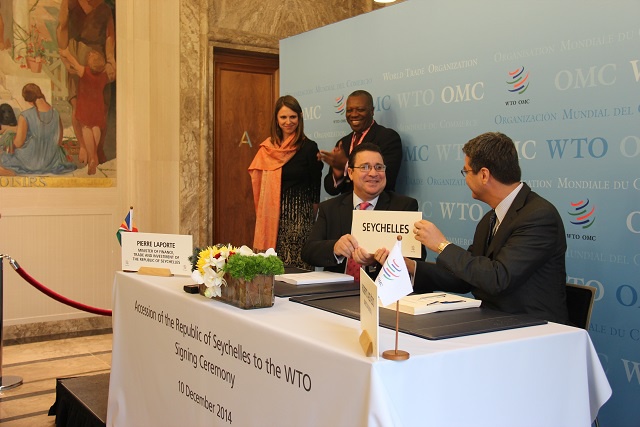 The Seychelles Minister for Finance, Trade and Investment, Minister Pierre Laporte and Roberto Azevedo, Director General of the WTO at the signing ceremony of the accession protocol in Geneva on Wednesday December 10, 2014. (Ministry of Finance, Trading and Investments)

(Seychelles News Agency) - A 19-year-long process for Seychelles to become a member of the World Trade Organisation (WTO) came to an end yesterday when the island nation’s Minister for Finance Trade and Investment Pierre Laporte signed the accession protocol.

The signing ceremony followed the approval of the Seychelles’ accession package, including the accession protocol by WTO’s General Council in Geneva, Switzerland, at its last meeting for this year.

This means the Indian Ocean archipelago of 115 islands, with a population of around 90,000 people, will officially become the 161st member of the WTO, 30 days after the ratification by the National Assembly of its accession protocol.

According to a press statement issued by the Ministry of Finance, Trade and Investment (MFTI) the ratification is expected to be completed by latest, in the first quarter of 2015.

Describing the step as a historic day for Seychelles and its people Minister Laporte said the WTO membership will bring several benefits to the country. He noted that reforms that had to be undertaken during the accession process have helped bring the country’s laws and policies at par with best international standards.

“……Our private sector has already began to reap the benefits of a more predictable and transparent trading system. Seychelles now has a platform which provides the country, as a small island nation, with an equal opportunity as its large counterparts to make its voice heard on trade issues,” said Laporte in the statement.

Addressing the WTO’s General Council in Geneva, Laporte also paid tribute to what he described as the “crucial leadership and guidance” of the Seychelles President James Michel to the process as well as the role of the country’s Vice President Danny Faure, who was the finance minister when the country first embarked on its IMF-assisted economic reform programme in 2008.

According to the MFTI statement the Director General of the WTO, Roberto Azevedo also recognised “Michel’s leadership in pursuing WTO membership and undertaking the far-reaching reforms have made it possible for Seychelles to conclude the accession negotiations successfully.”

Currently, the WTO's membership of 160 member states accounts for over 97 percent of the world's total trade.

The process of becoming a WTO member is unique to each applicant country, but takes an average of about five years for most nations.

Trade in goods between the European Union and the Seychelles is governed by the interim Economic Partnership Agreement (EPA) signed in 2009 and the EU is the Seychelles' main trading partner, accounting for 66% of its exports and 33% of its imports.

The Seychelles Chamber of Commerce and Industry chairperson, Marco Francis told SNA that the membership had to be embraced and utilised to the business community in Seychelles' advantage.

"What needs to be done now by the Ministry of Finance, Trade and Investment is to have targeted informative sessions for people in the private sector and businessmen to educate them on what is to be expected and what’s in it for them and how to use this for their own benefits," he said.

"The SCCI would like to do this but has limited resources, so MFTI has a big role to play as they have the necessary resources to do so."

Welcome news for the EU

According to the European Commission that has welcomed Seychelles accession to the WTO, in 2013 the total value of EU goods exported to Seychelles was €316 million, while imports from the Seychelles amounted to €294 million.

"The EU has strongly supported the accession of the Seychelles and is very pleased to welcome our partner in the Africa-Caribbean-Pacific group as a new member of the WTO family. This accession and the queue of 22 countries that want to join continue to highlight the indispensable value of multilateralism," said EU Trade Commissioner Cecilia Malmström in a statement.

According to the trade division in the Seychelles Ministry of Finance, Trade and Investment, the largest volume of imports to Seychelles for 2013 were from the UAE, followed by Spain, France, India, South Africa, Italy, Singapore, Mauritius, the United Kingdom, Thailand and China.