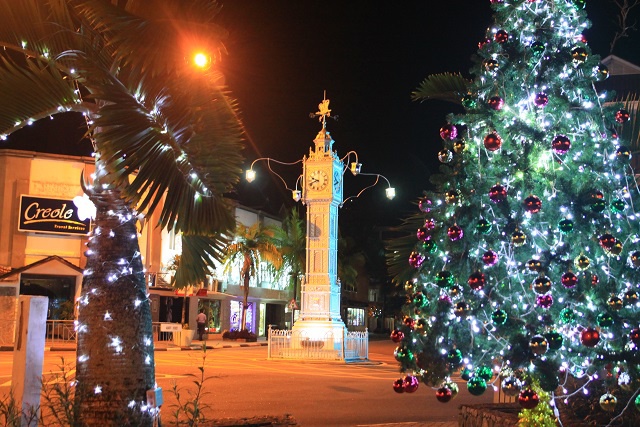 Victoria, the small capital of Seychelles islands in the Indian Ocean is cloaked in shimmering lights, and radiant colours signalling the start of the Christmas season. (Joe Laurence, Seychelles News Agency).

(Seychelles News Agency) - With a warm tropical breeze and bursts of rainfall showering Victoria, the small capital of Seychelles islands in the Indian Ocean is cloaked in shimmering lights, and radiant colours signalling the start of the Christmas season.

One could almost forget the surroundings of shops and restaurants when walking through Victoria town during this time of year, as the second consecutive year, Seychelles has successfully created what could best be described as an exotic Christmas wonderland.

Although the idea of palm trees hugged by golden and clear blue lights aren’t the Hollywood embodiment of a snowy northern-hemisphere Christmas, Victoria has a unique way of pulling it off as colourful lights adorned huge gifts and majestic Christmas trees, draping off buildings and trees along streets such as Francis Rachel street, Independence Street, 5th June Avenue Street as well as stretching to other streets that surround Victoria.

This colourful display of lights that boast an investment of more than 70 thousand dollars is switched on from 6:45 pm to 6:00 am local time.

This is the second time that the Mayor of Victoria, Jacqueline Moustache-Belle, has dressed up the capital for Christmas with the help of local businesses who have either to decorate themselves or give donations to the Mayor’s office.

‘Most shops have started to decorate their premises but we are urging them to put some more’, said Moustache-Belle in an interview with the local television, the Seychelles Broadcasting Corporation (SBC).

‘As soon as the lights are switched on, maybe more people would do so as well. This creates the ambiance of Christmas and the festive season...’, said Moustache-Belle on SBC.

The office of the Mayor has also confirmed to SNA that most of the lights being used has a light-emmiting diode (LED), a device that reduces the consumption of electricity and is more environmentally friendly.

Joyful display of choirs singing Christmas carols as well as the apparition of ‘Santa Claus’ in Victoria are expected to lift up the spirit of visitors to the small capital throughout the week leading up to Christmas.

The Mayor has this year launch a facebook page where visitors and locals are being urged to post their photos.

Already comments are being posted on the sites, with some people saying the lights were more attractive last year whilst others are making suggestions for improvement.

Days after the lights were switched off, many of the 90,000 population of the archipelago have flocked to the capital to take photos of the display.

SNA took the opportunity to ask some of the onlookers about what they thought of the illuminations and ornaments.

When asked about their favourite piece of décor, the majority of children under the age of 12 agreed that the Father Christmas figure situated at the peace park was their favourite, with the typical reason being that “He will bring me lots of toys on Christmas”, explained Naima.

On the other hand older children such asTori, 13 years old said she preferred the reindeers by the roundabout.

Most parents said that the illuminations have added to the excitement and ambiance of the festive season. “I think this year’s decorations are a lot better in terms of quality and design. The variety is greater and there are no issues with any of the figures deflating like last year. All in all I’d say great effort, and give them two thumbs up!” said parent, Tania.

“Personally it really is something that we weren’t used to in the past, both last year and this year’s displays are different from each other and I hope there are still more decorations to come from now till Christmas day.” said, Michaela Souri.

Christmas, on 25th December, in Seychelles is celebrated by the majority of the population, as according to the National Bureau of Statistics 76.2 percent of the Seychelles population is Roman Catholic, 6.1 percent Anglican, 2.4 percent Hindu, 1.6 percent Muslim, and 13.7 percent other faiths.