‘The world must do something’ about climate change, says Seychelles President to France 24 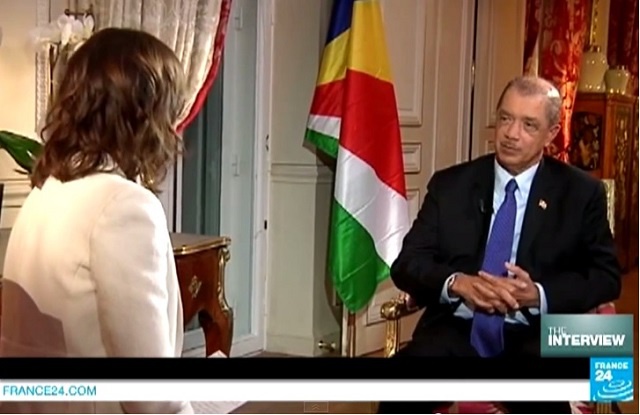 (Seychelles News Agency) - The far-flung islands of the Seychelles archipelago, or what are termed as the ‘outer islands’ are mainly flat and coralline compared to the inner islands which are mainly granitic and mountainous.

These undisturbed and pristine outer islands are home to a large proportion of the Indian Ocean islands wildlife.

But their existence is under threat.

Rises in the sea level and flooding have been recurring events and prompted erosion while islets have been observed to be occasionally submerged under the sea or simply have disappeared.

Fearing the worst, the Seychelles President James Michel has taken the lead in urging the ‘world to do something about’ climate change.

“I am very fearful ……because climate change is a reality. It is not only something that we are witnessing ourselves but the scientific community has given enough evidence to show that the climate is changing, the planet is warming and the sea level is rising”, said Michel.

Speaking to journalist Mairead Dundas in an interview on the English language channel of the French television network, France 24, the Seychelles President, painted a grueling picture of the fate of the small island state of 90,000 people, of the 115 island archipelago.

“…we see our coast being eroded, we see the migration of fish, the bleaching of our corals, and all these are having adverse effects on our economy, on our people, on our livelihood”, he said.

“It is a reality. We see it every day, we live it every day and we have also been stressing that the world must do something about this.".

Michel gave the interview whilst in Paris recently on a working visit at the invitation of the French President Francois Hollande, where they spoke about the climate change negotiations in Lima this month and Paris next year.

“We don’t have the capacity and…. we are ill-prepared….. And this is why we have appealed to international organizations, to our partners like France for example, to help us with experts, which will not only serve Seychelles but also serve the other island states in preparing the necessary documents for us to prove and to show that there is a need for the small island states to be protected,” explained Michel.

Looking ahead to Paris in 2015

A delegation of the small island state attended the 20th meeting of the Conference of Parties (COP) of the United Nations Framework Convention on Climate Change in Lima, Peru, which was expected to end on Friday but extended over the weekend.

At the conference, Seychelles pleaded for both mitigation and adaptation practices against climate change and reiterated that efforts be made to limit global temperature rises to below 1.5 degrees Celsius.

Michel said that he hoped world leaders would be able to come to an agreement, “so that when we come to Paris in 2015 we can have an agreement which can be signed and is binding and we should ensure that we can move further.”

Prior to the meeting, two industrial countries, China and United States announced their commitment to fight climate change and Michel said that this is a turning point in the bid for a binding document in Lima.

Dundas asked Michel whether he thinks there is an element of guilt from the other countries when considering the effects of climate change on small island states, to which Michel replied that “once we disappear and we lose our homes then it is humanity, it is the world that will be responsible for the disappearance of so many smaller countries”.

He added that “ small island states as a people we are in danger of losing our country, we are in danger of losing our very existence…if the world does not do anything especially those who has more the opportunity and also the capacity to do something to help our planet, then the small island states will disappear first before the other big states are affected as well”.

“…do you genuinely believe that you will be here in 12 months signing a global treaty to fight climate change?” asked Dundas.

Michel replied; “I am always optimistic and I think that the world is finally realizing that the earth is our only hope, our planet, if we don’t save it to be able to continue living on it we will have no home and no planet to live on.”