Charity walk brings Seychelles in the forefront fight against Ebola 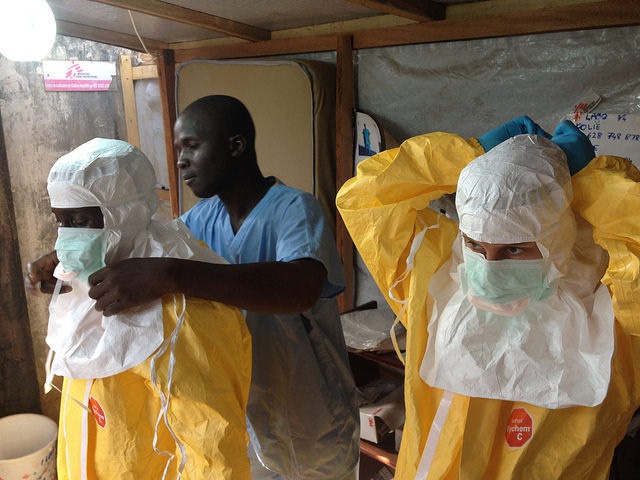 (Seychelles News Agency) - What began as a simple charity walk has now turned out to become a combined civil society and government initiative which has seen the Indian Ocean island nation of Seychelles joining the Ebola fight, while it remains Ebola-free.

Seychelles, an archipelago of 115 islands with a population of around 90,000 people has come out strongly expressing solidarity with the fight against the Ebola epidemic in West Africa through donations totalling some $16,000 in cash as well as essential medicines.

A sum of around $6,000 (87,000 Seychelles rupees) was raised through a sponsored charity walk held by former students and instructors' of the former Seychelles' National Youth Service (NYS).  The youth oriented residential educational establishment at Port Launay, on the west coast of the archipelago's main island of Mahé, has since been closed down.

The funds collected are being sent to Doctors Without Borders, which has 300 personnel in the affected countries assisting 3,000 locals in the first line defence to contain the outbreak.

At the presentation ceremony held on Monday, at the Maison Queau de Quincy, the Seychelles' Foreign Affairs minister Jean-Paul Adam announced that the government is matching the fundraiser kitty with its own donation of $10,000 which will be forwarded through the African Union (AU) Solidarity Fund against Ebola.

"Ebola is a global problem." Adam said. "Though its epicenter is in West Africa, it is also of concern to everyone."

Adam said that the government has put in place adequate safeguards to ensure that Seychelles is free of Ebola.

According to the Minister the best way to remain Evola-free is to support the affected countries by enabling them to overcome the epidemic.

Rose-Marie Bargain an alumni of the NYS Class of 1981 Association,  coordinated the sponsored walk which was held on November 29  under the banner Ebola Aid Appeal.

According to Bargain public support was spontaneous and attracted generous support both in kind and cash. "It was a very good example of generosity, care and solidarity," she told SNA.

A member of the Guinean community in Seychelles, Mohamed Kanté who is a teacher commended the donations.

"This is true compassion and an act of faith in human values," saidKanté.

For his part the island nation’s Public Health Commissioner Dr Jude Gedeon warned that the risk of Ebola spreading was still high and all available resources should not be spared to contain the epidemic.

"For that reason, any effort to boost resources is commendable," Dr Gedeon said.

He announced that the Seychelles health ministry is sending around $14,000 (around 200,000 Seychelles Rupees) worth of medicines to the affected countries. An appeal was also made for contributions from private medical practitioners which saw an additional 800 gloves donated to the kitty.

Dr. Gedeon said the latest disease surveillance report indicates that Ebola is slowing down in Guinea and Liberia but continues to spread in Sierra Leone.

"If we can control it at source, the chances of it spreading to Seychelles and other countries are minimal," Dr. Gedeon said.

Seychelles introduced visa requirements in August for persons travelling from the three affected countries as well as countries that border the affected states and others in the region.

The viral haemorhagic fever that is Ebola was first detected in the forested region of Guinea early this year, before spreading to neighbouring Liberia and Sierra Leone, which are now hosting the highest numbers of infections.

The death toll from the Ebola outbreak in the three worst affected West African nations of Liberia, Sierra Leone and Guinea, reached 5,587 on December 10. This is according to the latest statistics released by the World Health Organisation (WHO) which also indicate that just over 18,000 cases have so far been recorded.

WHO's Liaison Officer in Seychelles, Dr Cornelia Atsyor said that whereas previously Ebola was confined to a few urban areas, it has now spread to outlying rural regions as well.

According to Dr Atsyor the reconstruction efforts in countries just emerging from civil conflict such as Liberia and Sierra Leone, are being rilled back by Ebola.

"Ebola constitutes a mixed picture. Despite a lot of effort , it continues to spread in some places." Dr Atsyor said. "That is why continued support is necessary for the good of humanity."

Health » Be a reporter: Write and send your article » Subscribe for news alert
Tags: Ebola, WHO